Under the Hood Café and Outreach Center 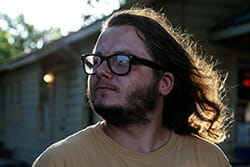 “Many of them opened as places for soldiers to decompress but developed into other things.  Between 1968 and 1972, the Oleo strut became a stronghold of veteran activism, setting up the organizing of boycotts of businesses that exploited soldiers, leading peace marchs, and even publishing an underground newspaper.”

Speaking about Under the Hood, Malachi told me:   “We connect service members with third party legal services and resources like the GI Rights Hotline and the Military Law Task Force [of the National Lawyers Guild]. We do peer counseling for PTSD groups.  We have had groups for MST [Military Sexual Trauma] in the past.  We try to help folks get connected with medical services if they need to be evaluated by a medical evaluation board or they need to apply for benefits.

“We have supported many conscientious objectors and others through their out-processing period and into civilian life. It can be a tough transition.

“We hold writing workshops, poetry workshops, and art workshops.  Sometimes they are healing experiences.  They empower people to share their experiences of being entangled with militarism.  It can be seen as healing and validating, promoting free speech and transparency, and telling their own stories.  They [the workshops] empower people to tell their own stories without the filters of media or public affairs or the military itself.

“When I was in the military, I felt the experiences were represented by numbers or pieces of paper. There was little room for me to express what those experiences meant to me.   Soldiers have a hard time asking for help. There is a large gap between the civilian community’s perceptions and the military community’s experiences.

“VFP [Veterans for Peace] and IVAW [Iraq Veterans Against the War] have organized out of Under the Hood and we have partnered with them for campaigns such as IVAW’s ‘Right to Heal’ and ‘Operation Recovery.’

“Under the Hood is at Fort Hood because it is the largest military base in the world as far as square mileage goes.  We’re working on getting a low power FM radio license.  We hope that it will serve the goal of educating GIs about their rights regarding Conscientious Objector status, free speech, and discharge upgrades.   We also want the radio station to build community around common experiences and struggles.  We have support from the local community as well as from organizations furthering community radio.  We have been helped by the Prometheus Radio Project and by Austin Airwaves.

“Ribs and Rights is a regular Thursday evening community meal and popular education  program we do to inform service members of their rights and to build community.  Every second and fourth Friday of the month, we host a poetry night with Killeen Poetry Slam.  A lot of the participants are veterans or service members.  We do warrior writers’ workshops and papermaking workshops.  Service members learn to make paper out of recycled military uniforms to express themselves and share their experiences.”

Ryan Holleran is a member of Under the Hood’s Advisory Committee.   He enlisted in the Army and served in the infantry from 2010 to 2013 with one deployment to Iraq in 2011. He found his way to Under the Hood within a few weeks of returning to Fort Hood from Iraq.   Ryan told me: 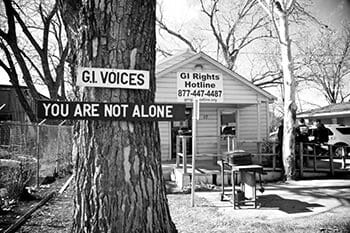 “As I first approached Under The Hood, I was a soldier struggling with his conscience.  The signs that read ‘You are not alone’ and ‘In war there are no unwounded soldiers’ spoke to me.  As I watched myself and many others evolve and heal, I realized that this cafe, through my introduction to a community, was changing my concept of humanity that war wrecked.

“In order to recover from war, I had to redefine my concept of humanity, in a way that opposed the Army’s conditioning. The nature of the Army’s existence demands that its soldiers do not see the ‘enemy’ as ‘real people’, it was through exposure to poetry, Combat Paper making [a process of recycling uniforms into paper], and gardening at Under the Hood that I began resisting the philosophy of militarism.  It was challenging to come to views that conflicted with the status quo on post.  Looking back at my time in Killeen, I see that even the process of healing is a form of resistance.

“Under the Hood provides a space for service members, those affected by militarism, to be nurtured and heal.   This space [UTH] and the people dedicated to its continued operation, have had a dramatic effect on my recovery, and my gratitude cannot be exaggerated.”