Trump promises post election coup. We can hope for the best–or prepare to respond. 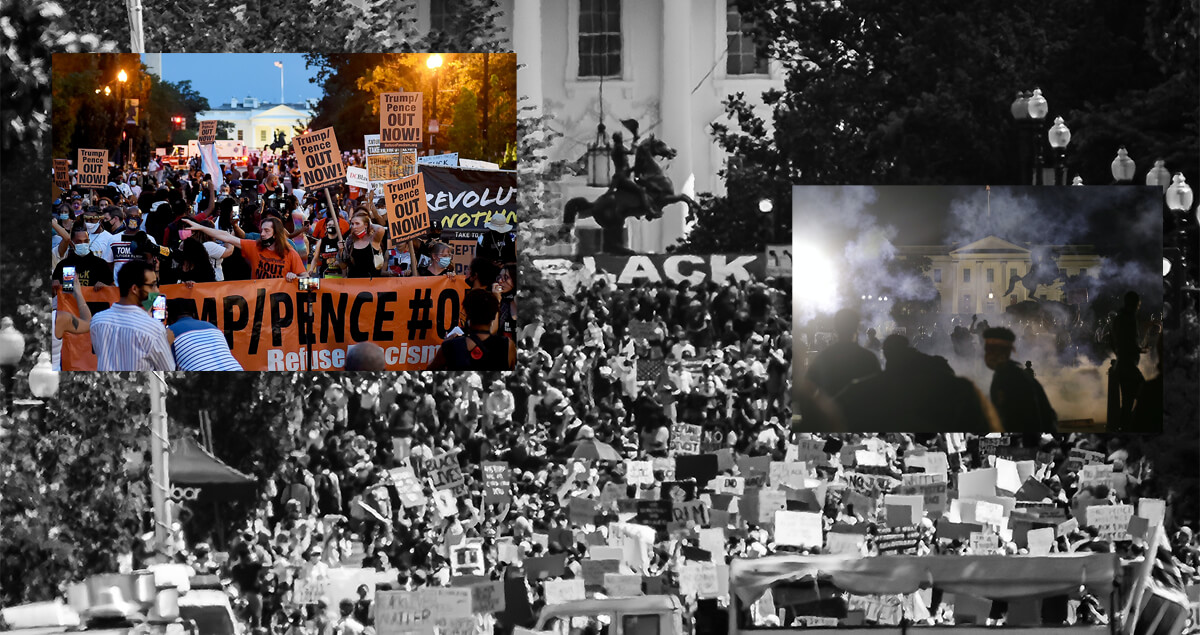 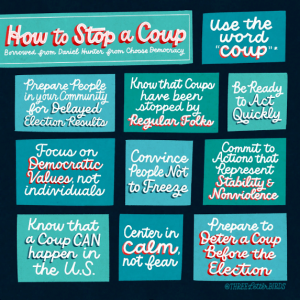 There is now only four weeks until the U.S. presidential election, and the world is watching to see what happens next. Following the recent presidential debate between Trump and Biden, major newspapers published articles such as this one about political leaders around the world watching the chaos with concern.

As I have written about previously, Americans need to be prepared for the possibility that Trump attempts to overthrow the democratic system to stay in power, and be prepared to act accordingly.

Pollsters put Trump’s odds at about 20%, but nearly half of Americans believe he will be reelected regardless. That 30% difference represents an expectation of some version of a coup. That could come in the form of right-wing militias delaying vote counts until the Supreme Court steps in to again declare their “winner.” Or, a faction of the military could fulfill their Commander-in-Chief’s current orders to arrest his enemies, including Joe Biden.

For months, Trump has engaged in efforts to undermine American’s trust in the democratic process, by falsely making claims that mail-in ballots are often fraudulent, an especially dangerous claim in a time many Americans are choosing to stay home to protect their health against COVID-19. According to other sources, the Trump campaign has talked about possibly trying to bypass election results in swing states by placing electoral college representatives who would ignore the popular vote.

More recently, Trump failed to commit to a peaceful transfer of power when asked about his intentions publicly. The New York Times has written about the concern this has created among top Pentagon officials that Trump may try and use the military for domestic conflict over the election, as he’s done against civil rights protesters in the Black Lives Matter movement.

Military officials are divided over how to handle such a situation. The actions of the public are therefore key in determining whether the military feels it’s in their best interest to defend democracy over the orders of a potential dictator.

Trump has continually shown a willingness to encourage violence and racism from his supporters. In the recent presidential debate, Trump went so far as refusing to condemn white supremacy, when asked to by Fox News debate moderator Chris Wallace. Instead, he told the “Proud Boys,” a group that has been classified by the Southern Poverty Law Center as a hate group, to “stand back but stand by.” And a recent news report described how Department of Homeland Security Officials were instructed to publicly defend Kyle Rittenhouse, who shot and killed Black Lives Matter protesters.

Trump has similarly escalated violence against people outside the U.S.. The U.S. military  has dropped a record number of bombs in the Middle East under Trump. He has also openly excused the killing of the families of terrorists, loosened U.S. military rules of engagement to enable more civilian casualties, supported a coup in Venezuela, and escalated conflict with Iran.

At Courage to Resist, our mission is to support the troops who refuse to fight, or who face consequences for acting on conscience, in opposition to illegal wars, occupations, the policies of empire abroad and martial law at home. We believe in using people power to weaken the pillars that perpetuate violence, both domestically and on foreign soil. Under Trump, the need for people power to push back against authoritarianism and the violence it promotes is increasingly clear.

We can look to examples of countries who have successfully stopped coup attempts for guidance of what to expect. According to the International Center on Nonviolent Conflict, over half of coup attempts worldwide have failed, thanks largely to the actions of vigilant citizens like us. Some allies at Choose Democracy have published a guide to 10 Things You Need to Know to Stop a Coup, republished on Waging Nonviolence’s site and presented in graphic form below. They are also hosting workshops and other resources on their website.

Over the coming weeks, we must insist on a fair and free election in which all ballots are counted, fight misinformation in our communities, and prepare to gather in the streets to demand members of the military side with the people and help evict Trump if necessary. Working together we can create the people power necessary to turn the tides toward democracy once again.