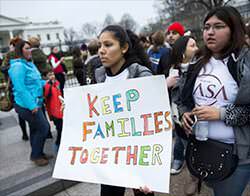 In 2013, the Department of Homeland Security, at the request of the Defense Department, issue a policy memorandum aimed at preventing the deportation of spouses, parents and children of active-duty service members through a program called “Parole in Place.” Put simply, the program allowed immigration authorities to give the immediate family of military service members a temporary reprieve from enforcement actions based on their immigration status. It specifically barred those with criminal convictions from these protections. … [the new Executive Order] casually dispenses with exercises of executive discretion based on a “specified class or category of aliens.” The administration either did not know or did not care that one of these specified classes included military families. Read the op-ed at the San Diego UT