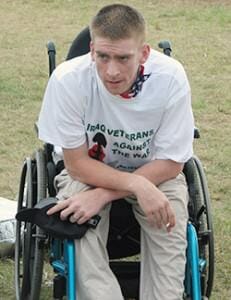 Iraq war veteran and outspoken Iraq war critic Tomas Young has died at the age of 34.

Tomas Young enlisted in the Army following the September 11 attacks, volunteering to go to Afghanistan. He was sent to Iraq in 2004, and was left paralyzed by a bullet on the fifth day of his deployment. In 2008, he explained that “many of us volunteered with patriotic feelings in our heart, only to see them subverted and bastardized by the administration and sent into the wrong country.”

Young was the subject of the award-wining documentary Body of War by Phil Donahue and Ellen Spiro.

Last year, Tomas read a letter to Bush and Cheney which read in part: “You may evade justice but in our eyes you are each guilty of egregious war crimes, of plunder and, finally, of murder, including the murder of thousands of young Americans — my fellow veterans — whose future you stole.”

Photo by Jeff Paterson. Tomas Young traveled to Crawford, Texas in an attempt to challenge President Bush on the Iraq War. August 29, 2005.