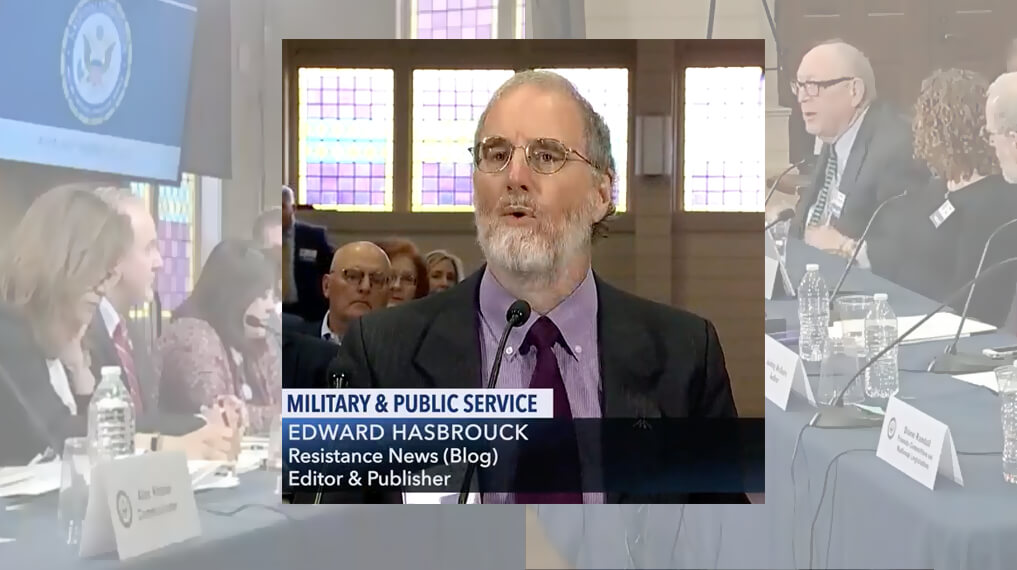 On April 25, 2019, Courage to Resist supporter Edward Hasbrouck provided testimony before the National Commission on Military, National, and Public Service (NCMNPS) at their Washington DC hearing on potential policies to “encourage or require military, national, and public service from all Americans.” Watch Edward’s testimony on C-Span here (beginning at 19:25 min.)

In what could, and perhaps should, be the beginning of the end for draft registration, the former director of the Selective Service System told a Federal hearing this week that the program he helped create and once ran is no longer working, that the database of registrants has become so hopelessly incomplete and inaccurate that it couldn’t be used for a military draft that could be enforced or would stand up to due process and fairness challenges, and that it can and should be shut down entirely rather than trying to expand it to women.

On Wednesday, 24 April 2019, Dr. Rostker was seated at the opposite end of the witness table in front of the National Commission on Military, National, and Public Service (NCMNPS) from the current Director of Selective Service, Donald M. Benton, an early Trump supporter and state campaign chair with no relevant experience or apparent qualifications for the Selective Service job who was appointed to the position as a political sinecure. 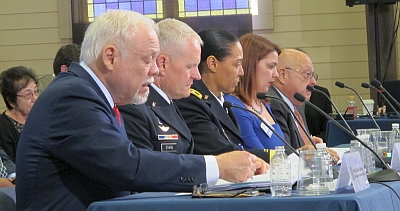 Donald M. Benton, current Director of the the Selective Service System (near left) listens as his predecessor Dr. Bernard Rostker (far right) testifies that it’s time to end the program they have both directed.

Rostker started his career as an economist, and his message to the NCMNPS was neither partisan nor anti-draft, but pragmatic and businesslike:

As I have argued in my recent paper the current system of registration does not provide a comprehensive and nor an accurate data base upon which to implement conscription. It systematically lacks large segments of the eligible male population and for those that are included, the currency of information contained is questionable….

The most recent district court ruling finding the unconstitutionality of a male only draft also is not an endorsement for registering or conscripting women…. I cannot think of a more divisive issue than the conscription of women, an issue that clearly does not need to be addressed at this time given that a return to a draft is so unlikely. This is a “fight” we really don’t need to have. It is a “fight” that can and should be put off…. If this means that at this time the MSSA [Military Selective Service Act] needs to be repealed, so be it….

In fact, a pre-mobilization draft only existed after World War II and impacted the conflicts in Korea and Vietnam. In Vietnam it proved so divisive that it was replaced by an all-volunteer force we have today. A more correct reading of history shows that we have engaged in active military conflict numerous times since 1973 without the “help” of the Selective Service System, including the longest military conflict in our history. There are many reasons why we have been able to do so which negates the need for conscription. Most significant is the change in military technology which makes the need for a mass of untrained manpower, the very thing the draft provides, unnecessary and actually a burden. Today the Army does not need and cannot absorb the mass of untrained and unskilled men, and potentially women, the draft would provide. If history tells us anything, it is that when we have needed to build a mass Army, as we did for World War I and World War II, there was sufficient time to develop a new Selective Service System from scratch…. So, my bottom line is there is no need to continue to register people for a draft that will not come; no need to fight the battle over registering women, and no military need to retain the MSSA.

Rostker has said similar things before, including in an interview in 2017 that I quoted in my own written statement to the NCMNPS and in a 2018 paper, but not with quite such a blunt recommendation for repeal of the law authorizing the President to order young men to register for a draft. While I disagree fundamentally with Rostker about whether a draft is a good idea in the first place, he made many of the same main points in his testimony on Wednesday afternoon (video archive of panel with Rostker on C-SPAN) as I did on Thursday morning as part of the next panel of expert witnesses to be called before the NCMNPS (video archive of panel with me and Diane Randall on C-SPAN).

It’s not every day that the former head of a Federal agency tells his successor, live on C-SPAN, that the agency they have both directed is no longer able to accomplish its purpose and should be shut down. But few journalists sat through all of the two days of hearings on Selective Service before the NCMNPS this week, and most of those who dropped in or tuned to C-SPAN for portions of the hearings were focused on whether draft registration should be extended to women rather than whether it should continue at all. So far as I can tell, Rostker’s testimony — clearly the headline news not just of this week’s hearings but of all of the two years of activities of the NCMNPS to date — has been reported only in Paul Jacob’s This Is Common Sense column.

The Thursday morning panel, which included Diane Randall of the Friends Committee on National Legislation (FCNL) as well as myself, was the first time in almost forty years that draft resisters or conscientious objectors have been invited to tell Congress or a Federal commission, in public, what we think should be done about draft registration. More testimony in support of ending draft registration rather than trying to expand to to women was offered during the public comment periods following questioning of each of the panels of invited witnesses during the two days of hearings this week.

Additional witnesses who testified in favor of ending draft registration included Paul Jacob (like me, one of the 20 nonregistrants who were prosecuted in the 1980s before the Justice Department realized that show trials of activists were encouraging more resistance); Executive Director Maria Santelli, Counseling Director Bill Galvin, and staff attorney Iman Hassan of the Center on Conscience and War; Ari Standish and Callum Standish from Pacific Yearly Meeting of Friends; Kate Connell from Truth in Recruitment and the Santa Barbara Meeting of Friends; Chris Kearns-McCoy of FCNL; Kindra Bradley, Executive Director of Quaker House; Jim Fussell; and others including other men who have not registered when they were supposed to do so. This was the first time that members of the NCMNPS had been confronted, face to face, by young people who they would have to prosecute if they tried to enforce the current draft registration requirement of expand it to young women as well as young men.

The report of the NCMNPS, including a yes-or-no recommendation on whether draft registration should be continued (and if so, a separate yes-or-no recommendation on whether it should be extended to young women as well as young men) is due in March 2020. Congress will probably take up the issue in 2021, after the 2020 elections and after the government has exhausted its appeals of the court ruling that the current registration requirement for men is unconstitutional.

Reprinted from Edward’s blog at resisters.info