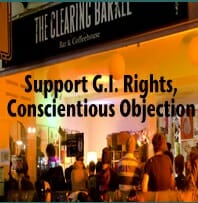 This Memorial Day it’s worth remembering that World War II persists. Over 100,000 U.S. and British bombs remain in German soil and continue to kill. During the last 71 years, the U.S. has never ended the war taxes, left war footing, or ceased empire building. Some 50,000 U.S. troops are stationed in Germany to this day.   In fact, the United States has made Germany central to its wars today in western Asia and the Middle East, shipping troops via Germany into numerous wars, and bringing the wounded to a U.S. hospital (Landstuhl) in Germany. The United States has also made Ramstein Air Base in Germany central to its drone wars.   As at U.S. bases in the United States and around the world, U.S. troops in Germany often need help with PTSD and moral injury. They need accurate information on their rights, including how to conscientiously object, and including how to legally speak out against atrocities they have witnessed or committed.   Fortunately, they have Meike Capps-Schubert. She is co-founder and current manager of the Clearing Barrel GI-Coffeehouse in Kaiserslautern next to Ramstein. It’s believed to be the only GI-coffeehouse outside the United States. That coffeehouse is doing vital work on a shoestring. Please click here to help with a contribution, tax-deductible in the United States. Meike is a counselor with the Military Counseling Network e.V. — the German branch of the GI-Rights Hotline, which provides free, confidential, and accurate information on U.S. military regulations and practices to members of the U.S. military, veterans, and their families. She has also helped build critical support for U.S. war resisters in Germany since 2003.   The Clearing Barrel needs our support. Please make a donation.   Meike has assisted U.S. war resisters like Augustin Aguayo and Andre Shepherd who have helped turn public opinion against the war on Iraq. She has organized winter-soldier and other public events with U.S. veterans in Germany. The Clearing Barrel now serves as a meeting place for members of the military and peace activists, as well as a source of information on counseling and rights.   Since the abolition of compulsory service in Germany’s Bundeswehr, this help and information have also become increasingly important for Bundeswehr soldiers and people who are considering joining the military for purely financial reasons and in response to promises of a “career.”   Often the best tool veterans find for healing is honestly speaking out about war. Their doing so contributes significantly to the struggle to end war. The Clearing Barrel makes this possible. Hundreds of events — readings, theatrical performances, concerts, and political events — have been held at the Clearing Barrel.   This work must continue and be expanded, and Meike urgently needs your support. Please click to make a contribution: