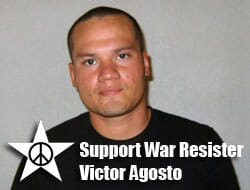 “There is no way I will deploy to Afghanistan. The occupation is immoral and unjust. It does not make the American people any safer. It has the opposite effect.” The words were scrawled in black ink on the bottom of a military counseling statement, a routine piece of paperwork turned in May 1st to the commander of a Ft. Hood, Texas Army unit headed for Afghanistan. It was signed Victor Agosto, U.S. Army.

Agosto is publicly refusing orders to deploy to Afghanistan. Having served in the Army since 2005, including a tour in Iraq, Agosto can no longer bear to serve and says that he is, “ready for the consequences, whatever they are.” Since May 11th, he has been refusing all orders directly connected to his unit’s deployment to Afghanistan, including an order to track the serial numbers of trucks headed for Afghanistan. He has since been assigned to non-deployment tasks such as sweeping the motor pool and “company area beautification” as he waits to see what the military will do to him.

Agosto’s refusal comes as the first waves of troops are being shipped to Afghanistan under the Obama Administration’s recent escalation. President Obama has ordered 21,000 more troops to deploy to Afghanistan this summer, seeking to more than double the 32,000 deployed to 68,000 in the next few months.

There is scant evidence about how the troops themselves feel about this escalation. The most recent study, a 2006 Zogby poll for Iraq, found that 72% of all U.S. troops there thought the U.S. should immediately withdraw. Many of those same troops are now being asked to fight in Afghanistan.

Calling from the Ft. Hood Army barracks, the 24 year-old Miami, Florida native spoke in a deliberate, measured voice. He explained that his own opposition to the Afghanistan war developed gradually. Having initially joined the military to, “see the world and do something with his life” he began to doubt the initial justifications for that war before being deployed to Iraq, yet was convinced that the U.S. should stay in that country to “clean up its mess.”

While in Iraq, Agosto worked in communications at the tech control facility and did not see any violence or “ever feel the slightest bit of danger.” Nevertheless, during the last few months of his deployment, his doubts about both Iraq and Afghanistan began to grow. “I came to oppose it the way a lot of people did. I thought about it, read some books. Then I began seeing the role I played in the imperialist framework.”

When he returned to Ft. Hood Texas, Agosto began attending meetings of Iraq Veterans Against the War (IVAW), an organization comprised of people who have served in the U.S. military since September 11th, 2001. He also became a regular at Under the Hood, an anti-war GI coffeehouse just outside of Ft. Hood, Texas. The coffeehouse, fashioned after the anti-Vietnam War coffeehouse movement of the 60’s and 70’s, provides a space for troops to speak freely, seek help and support, and explore the possibilities of resistance.

“I came to realize that the wars really don’t do what the stated reasons are, which is to make us safer,” said Agosto. “Both occupations fuel the insurgencies in those countries. We are creating “terrorists” and we are killing so many innocent people.” He argues that the wars are both “power plays” whose real intent is to, “establish more control and spread U.S. hegemony.” A few months ago, he decided he wouldn’t go back.

“I’ve worked with Victor for almost a year, and he’s been here at the coffee house since the first day,” said Cynthia Thomas, manager and board member of Under the Hood. “When he decided to resist, I completely backed him, knowing the consequences. I completely respect his decision.”

While the military is not forthcoming with information about the number of troops refusing deployment to Afghanistan, statistics suggest military resistance overall is on the rise. Since 2002, the Army has court-martialed twice as many soldiers for desertion and other unauthorized absences per year than for each year between 1997 and 2001. AWOL rates in the Army are at their highest since 1980, with the desertion rate having jumped 80 percent since the start of the Iraq War, according to the Associated Press.

Several individuals have publicly refused deployment to Afghanistan. Blake Ivey, who went AWOL last fall rather than deploy to Afghanistan, has been publicly spoken out against the wars in Iraq and Afghanistan. Benjamin Lewis, a former marine who was recalled from the Individual Ready Reserves, declared that he would not go to Afghanistan or Iraq if asked. He was quietly discharged from the marines last month. Many Afghanistan war resisters have made their way to Canada, where an estimated 250 currently reside.

Victor is taking considerable risk in publicly refusing to deploy. “The worst-case scenario for Victor is a general court martial and years in jail,” says Jeff Paterson, Project Director for Courage to Resist, an organization that supports troops who refuse to fight in Iraq and Afghanistan. 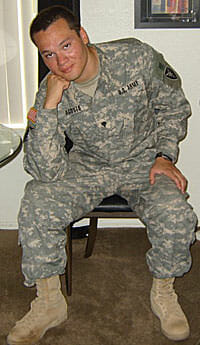 The harshest sentence given to a public resister since the beginning of the Iraq War was 15 months and dishonorable discharge. However, Paterson says that, “many other resisters that no one ever hears about are given considerably longer sentences. If people rally to his defense and support him with a competent civilian legal attorney, we can minimize that punishment.”

Agosto admits he has been scared of what might happen to him at each step along the way, from writing his refusal on his counseling form to refusing an order on base. Yet, he is determined not to fight this war.

“Overwhelming support from the central Texas peace community has made things easier,” says Agosto. “People at Under the Hood and in the greater peace community have been there for me every step of the way.” He has also been met with a flurry of international support since going public with his refusal and says that he hopes his actions “help other soldiers see that there is a lot of support for war resisters.”

Agosto has also received support from fellow soldiers at Ft. Hood. “Some of the people in my unit will flash me peace signs when they walk by me,” he says. “The other day when I was coming back from the shop, this soldier stopped me and said he wanted to shake my hand. He told me he looked up to me for not going to fight a war I don’t believe in.”

Sarah Lazare is Project Coordinator for Courage to Resist, an organization that supports the troops who refuse to fight in Iraq and Afghanistan. 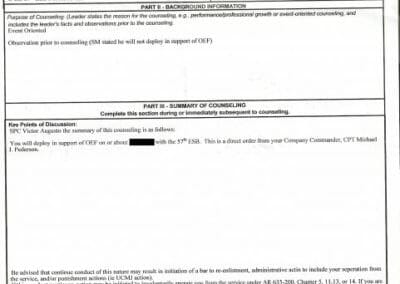 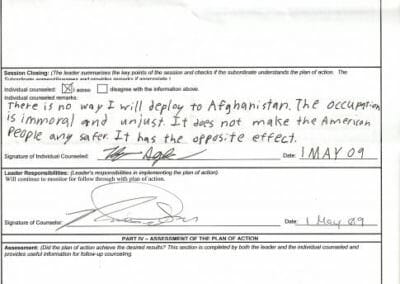 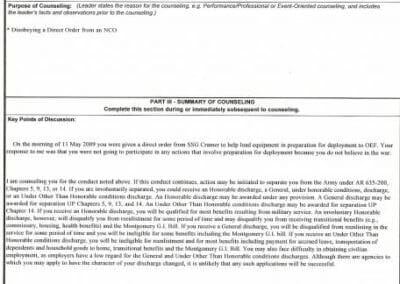 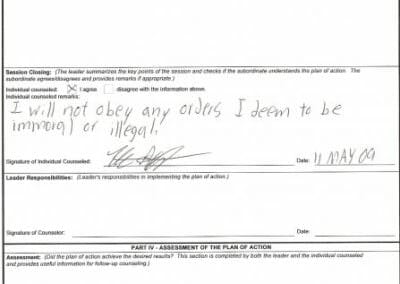 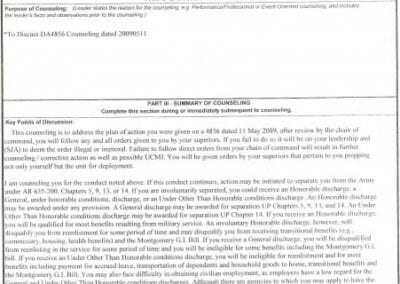 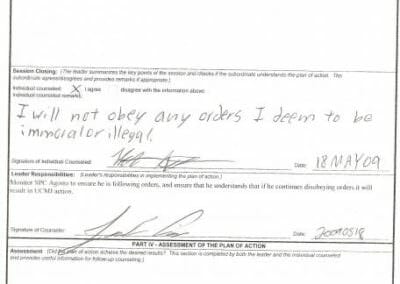 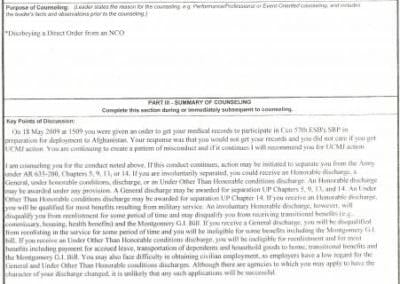 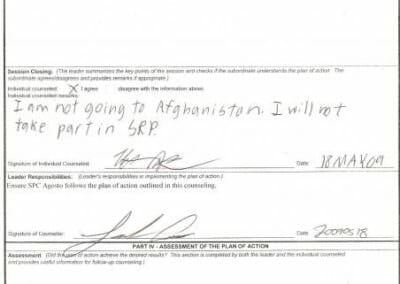