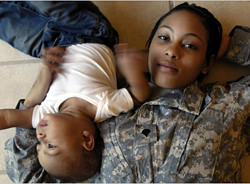 In short, we win! Alexis did not go to Afghanistan, will not go to jail, will not be separated from her baby Kamani, and will get out of the Army. To everyone who signed the petition or donated to her legal defense, thank you.

By Friends and Family of Alexis Hutchinson.
February 11, 2010

Spc. Alexis Hutchinson, the single-mother in the Army who missed deployment last year when her childcare plans fell through at the last minute was today granted an administrative discharge from the Army. Hutchinson and her civilian attorney, Rai Sue Sussman, are happy with the results. Spc. Hutchinson says that she is “excited to know what will happen to me, and that I am not facing jail. This means I can still be with my son, which is the most important thing.” (Photo:  James Dao, NY Times. 2/12/10)

Hutchinson will receive an “Other Than Honorable” discharge, but will not be facing criminal charges at a court martial, which would have subjected her to a bad conduct discharge and up to a year in jail if she lost, as well as a criminal record. Ms. Sussman stated: “we would have fought the court martial, and I think that we had valid defenses if it went to trial. However, this resolution will give Alexis closure and the ability to move on immediately, without a lengthy trial and possible jail term.” They believe that at trial, the evidence would show that Spc. Hutchinson had intended to deploy until her childcare plans fell through.

The Army has regulations which anticipate the situation of single parents having plans for childcare during deployment fall through. The regulations call for an extension of time to find alternate care-givers, and to discharge a parent honorably if no solution is found. Sussman states: “Here, the Army did not act according to their own regulations, and did not value the family responsibilities of this soldier. If they had, Spc. Hutchinson would not have been in this situation and would be getting a better discharge.”

Currently Spc. Hutchinson remains assigned to Hunter Army Airfield near Savannah, Georgia, where she has been posted since February 2008.

On November 5, 2009, after childcare plans fell through, Alexis was faced with the dilemma of having no one to take care of her son when she deployed. She did not show up for the plane, and when she reported the following day the Army arrested her and removed her son from her.

Her son was allegedly placed in an Army day care, and his grandmother picked him up a few days later. Alexis was granted leave to go home for the holidays in December, and returned to Georgia with baby Kamani in early January. Both Hutchinson and her son are currently at Hunter Army Airfield.

In January, the Army filed court martial charges against Spc.
Hutchinson, and refused to discharge her under the regulations allowing for discharges for reasons of parenthood responsibility.