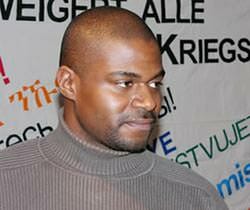 In late 2008, US Army Specialist André Shepherd filed an application for political asylum in Germany. On June 25, 2014, the European Court of Justice will hear his case.

37-year-old André Shepherd was deployed to Iraq for six months as an Apache helicopter mechanic. After returning on leave to his unit stationed in Katterbach, Bavaria, he seriously deliberated the effects of U.S. military action on the civilian population in Iraq. After some time, he decided to go AWOL, and then seek refuge in Germany. He based his application for political asylum on the European Union Qualification Directive, which is intended to protect those who refuse to participate in a war or other activities that violate international law, and who may expect persecution as a consequence.

André’s lawyer, Reinhard Marx, observed that in this important case, an AWOL soldier from the United States will, for the first time, be tried at the highest European court: “This shows the tremendous significance of this case.”

To obtain a decision on a key question by a court requires from the defense not only a lot of perseverance, but also solidarity and financial reserves: for effective publicity, for the court proceedings and for attorneys’ fees.

Therefore we would like to ask you for financial and moral help for André Shepherd at www.betterplace.org/en/projects/9032

2004: André Shepherd joined the U.S. Army, and, after training, was deployed to Iraq for six months as an Apache-Helicopter mechanic.

2005: After returning to his unit, stationed in Katterbach, Bavaria, he seriously deliberated the effects of U.S. military action on the civilian population in Iraq. “Finally I knew that if I went back, I would be responsible for the deaths and misery of others.“

2007: In April, after André Shepherd was informed that he would be ordered to return to action in Iraq, he left his unit and went underground in Germany.

2008: November 26, he applied for political asylum in Germany. In his application, André  Shepherd appealed to the Qualifications Directive of the European Union. This rule  guarantees dissenting soldiers protection for refusal of participation in illegal wars or actions which violate human rights, and for this reason could face persecution and punishment.

2011: March 31, the Bundesamt für Migration und Flüchtlinge [Federal Bureau of Migration and Refugees] rejected the application, despite  wide public support for Shepherd. His lawyer appealed against the decision.

2013: The Munich Administrative Court canceled a scheduled hearing and submitted a request for a preliminary ruling to the European Court of Justice in Luxemburg, with the purpose of examining “the degree to which an involvement in military hostilities is necessary, in order to offer the right of refugee status to a military deserter,in danger of being punished for his desertion.“

2014: The European Court of Justice scheduled a public hearing for June 25. “It is good to see that there is progress in the case”, so André Shepherd. “We hope that the European Court not only has the will, but the courage to take a stand for the right to freedom of conscience. Other soldiers should feel assured that their decision to refuse participation in wars or crimes in violation of international law will be supported.”

After a decision by the European Court of Justice, expected in 2015, the Administrative Court in Munich will rule, on the basis of the European court’s verdict, on Shepherd’s asylum application.