Sgt. Ricky Clousing sentenced to three months in the brig

“I’d rather spend a year in jail than participate in an illegal war and be part of the machine suppressing Iraq” –Sgt. Ricky Closing

Sgt. Ricky Clousing, who served as a U.S. Army Interrogator in Iraq in 2004 and 2005, plead guilty to “absent without leave” on Thursday October 12 at Ft. Bragg in North Carolina. Clousing was sentenced to three months confinement, forfeiture of 2/3 pay while confined, and a bad conduct discharge.

Ricky is currently being held in a military brig at Camp LeJune in North Carolina and it is urgent that he receive your words of encouragement and support!   Please write to Ricky today!

For breaking news, to donate, and for updates about actions you can take to support Sgt. Clousing.

At his sentencing hearing, Sgt. Clousing continued to voice his concerns about the abuses of power that go without accountability and the everyday devastation of the occupation of Iraq. “My experiences in Iraq forced me to reevaluate my beliefs and ethics,” he told the judge. “Ultimately, I felt like I could not serve.”

Clousing left Fort Bragg, North Carolina where he was stationed in 2005 after returning from Iraq with the 82nd Airborne Division. He had been AWOL until August 11th, 2006, when he called a press conference in Seattle, Washington coinciding with the annual Veterans for Peace national convention where he went public with his stand against the war.View video of press conference or Read Ricky Clousing’s entire statement .

At the press conference, Clousing went public with his stand stating, “In Iraq I operated as an interrogator and was attached to tactical infantry units during daily patrol operations. As an interrogator I spoke to Iraqis each day. This gave me an idea of what local civilians thought of coalition forces. Throughout my training very appropriate guidelines for the treatment of prisoners were set. However, I witnessed our baseless incarceration of civilians. I saw civilians physically harassed. I saw an innocent Iraqi killed before me by US troops. I saw the abuse of power that goes without accountability. Being attached to a tactical infantry unit and being exposed to the brutalities of war, I began to doubt and reconsider my beliefs.”

Later in the day, he turned himself in to Fort Lewis military police where he was confined for two days and then ordered to report to Ft. Bragg. 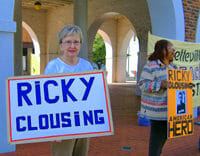 Supporters gathered in downtown Fayettville on the day of Ricky’s court martial. photo by: John Ashford

The 82nd Airborne of the United States Army has opened two parallel investigations into disclosures made by Sgt. Clousing about the abuse of power and lack of accountability of the U.S. Military in Iraq, but has not yet released the findings of this investigation. Clousing will testify at his court martial about the abuses he witnessed while serving in Iraq and the defense may call other witnesses.

In response to charges related to his 14 months absent-without-leave, Ricky stated: “Since I left the army I have known that being court martialed was a possibility I could face. I am at peace with my decision. I followed my conscience and, if need be, I will feel honored to join the ranks of others who have been prosecuted for doing the same.”

Clousing does not claim to be a conscientious objector, as is defined by the U.S. military, he is opposed to the war and occupation of Iraq based on his firsthand experience in country, which brought him to the conclusion that the Iraq war is a “war of aggression” that has “no legal basis to be fought”.