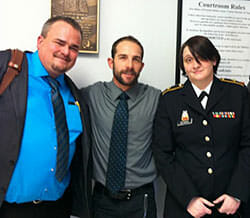 Yesterday, in a military courtroom at Fort Carson, Colorado, military war resister Sara Beining was sentenced to time already served in pre-trial confinement, and a “bad conduct” discharge. Sara was initially facing a decade in prison on two counts of desertion, so this is a huge victory. Sara benefited greatly from the representation of attorney James Branum of Oklahoma City. Mr. Branum’s services and expenses were paid for by Courage to Resist and our supporters nationwide. Sara was released from jail last night, and will be out-processed from the US Army in the next few days. Photo: Attorney James Branum, supporter Matt Stys, and Sara Beining during a hearing break.

Yesterday, Mr. Branum shared this update via Facebook, “Today’s news from Ft. Carson on case of War resister Sara Beining — Judge gave sentence of 5 months and a Bad conduct discharge. Our sealed plea deal was for no more than 4 months and not a dishonorable discharge so she only does 4 months. With credit for time served and good behavior, she is going to be released from jail, likely later tonight.” He added, “We are very pleased with this outcome! Woohoo!”

Sara went AWOL from the Army after returning from Iraq in 2007. During her absence from the Army, she served as a secretary on the national board of directors of Iraq Veterans Against the War.

Days before her arrest last year, Sara appeared on a Portland, Oregon, radio program to describe why she had gone AWOL: 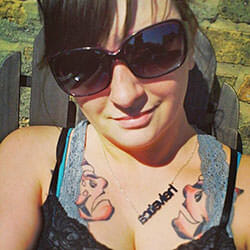 “We did this oath, to swear to ‘uphold and defend the Constitution of the United States against all enemies, foreign and domestic,” she told listeners. “And the longer I was in Iraq, the more I realized that we weren’t really doing anything to defend our own constitution. I was in intelligence. There were no weapons of mass destruction. The worst that was happening there for weapons was the depleted uranium in southern Iraq. Most Iraqi women gave birth to children, and the first thing people would ask is, ‘Is it normal?’ because there were so many birth defects due to depleted uranium. So many soldiers have symptoms of radiation poisoning and sickness. We weren’t helping our country over there, without a doubt.”

1. I know public defenders have a bad reputation but the Army’s PD’s (aka TDS or Trial Defense Services) are often very good. I was very blessed to get to work alongside one of the best TDS attorneys in the Army. I’m not going to name him (like most TDS folks, he is apolitical) but I do want to give credit where credit is due.

2. The prosecution’s main argument for aggravation was that my client was an advocate for social justice and that she was a board member of Iraq Veterans Against the War. Yes, that really was their main argument.

3. Comparing the outcome of this case (4 months and a BC) with the case of Kimberly Rivera (10 months and a BCD) is very interesting. Both Beining and Rivera were very politically outspoken while absent from the Army and both spoke extensively to the press. Both cases also had significant mitigating factors (the fact that both defendants were mothers of young children and had positive testimony on their behalf from friends and family). And both cases happened at Fort Carson.

So why did Rivera get more than double the sentence of Beining? Was it a matter of having a different judge or was it because Rivera sought refuge in Canada while Beining stayed in the USA? I definitely think this disparity in sentencing should be a significant consideration for Canadian officials in considering the cases of US war resisters seeking asylum in Canada.

4. I am very appreciative of the supportive of the peace activist community in the Colorado Springs and Denver areas. Most courts-martial have few spectators in attendance (and often no civilians) so it was nice that we had so many spectators.

5. One of my favorite moments in the hearing was when one of my witnesses very artfully deflected the inept attempts of the prosecutor to make some points in cross-
examination.