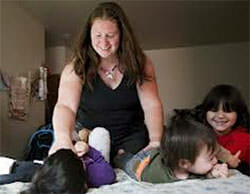 Courage to Resist interview of US Iraq War Resister Kimberly Rivera as she anticipates her approaching court martial trial for desertion. If jailed as expected next week, her husband Mario will be left to take care of their four small children.

Kimberly Rivera is at Fort Carson, Colorado, awaiting the April 29th start of her Army court martial trial for two specifications of one count of desertion. I asked Kimberly to talk about her present situation, and her thoughts and feelings as her trial nears next week. Here is Kimberly Rivera in her own words:

“I am being charged with Desertion with the intent to stay away and with shirking hazardous duty. I feel that it shouldn’t have to come to this or to any negative result for people to leave. If you are morally against what you are doing and don’t believe in what you are doing, if you can’t in your heart be able to harm another person but yourself… there should be a way out for people. I will be facing a sentence that is up to the judge and could be up to 5 years from what I know. My PTSD has been bad at times. In Canada I was doing community volunteer work that helped me cope with it and calm me. I was helping in soup kitchens, working in the community garden and was active in my kids’ school. I also had counseling after my medication was not working properly and I went to art workshops.

“To this day, I can’t handle or hold a weapon without breaking into severe anxiety and nervousness. Since being back in the army, I just go to work every day. Just playing soldier has been bringing up my anxiety. It has gotten worse as my trial gets closer. For a while, they had me clearing weapons and that just made me more nervous and increased my anxiety. They were having us clear them and test them for maintenance and malfunctions. One day, I almost passed out, clearing weapons.

“Mario’s health has been bad for a while, but he is trying to improve it. Without me at home it is difficult for him, as he is taking care of our 4 kids and they take most of his time. Having me home would help him. It would help my kids who miss me very much. Christian is suffering with depression, Rebecca the same. Katie keeps to herself and no longer opens up to anyone. She is having difficulties accepting that I will be gone for a while and tries to get me to come home. But I can’t. It breaks my heart. She says that she needs to go and save me. Gabriel has stopped eating and is dependent on Pedia-Sure for his nutrition. It is severely impacting him, negatively, having me away. 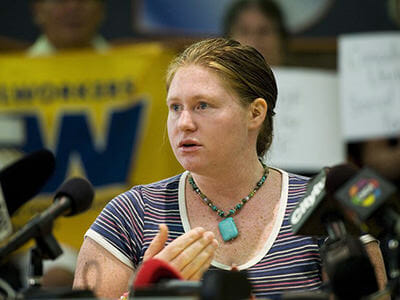 “I was breast feeding him up until I had to come back to the U.S. and was detained at the border. He was very attached to me. They all were and still are. My-mother-in-law has ended up in the hospital two times in the last month. Her health has been worsening and I am thankful that Mario’s parents, even with all their problems, do everything they can to help me, as well, and my kids. The fact that I may be facing jail time breaks my mother-in-law’s heart and also negatively affects her health. Doctors have told her to not stress or think about negative things and to stay calm. But she tells me, how can she, when her daughter is facing what she is? Mario’s brothers and father look after her and the kids currently. If I didn’t have Mario here with me right now, I don’t know how I would be. I am thankful for that. I need to be back home to put my mother- in-law at ease, to help her, to be with my kids so they can be happy again, and to help my husband, so we can be a family again.

“I was given no alternatives or help, by the chaplain, before I went AWOL, when I would discuss my moral objection. I knew nothing about a conscientious objector application, as that information was not made readily available or, at least, it wasn’t to me. Even with my objections I received no reprieve, no options in any course to take, and now that I know about the length of the application process alone and how long it takes to be accepted or denied, I realize that can be discouraging to anyone.

“When I saw the little girl [in Iraq] shaking in fear, in fear of me, because of my uniform, I couldn’t fathom what she had been through and all I saw was my little girl and I just wanted to hold her and comfort her. But I knew I couldn’t. It broke my heart. I am against hurting anyone…what I saw and felt and knew was that when it came down to it, I would not be able to harm anyone else, not for any reason. I would harm myself first. I felt this also made me a liability to my unit and I could not let me be a reason for anyone to be harmed—so I left.

“Being back is difficult. To have to pretend to be a soldier every day is difficult, because I am not. I was very involved in my community in Toronto. That’s how I knew people. I worked in the community garden. My kids were always out there with me when they could be. They loved it. The people I know were awesome and we always helped each other out. Now I can’t even see my kids. And when I had a chance to go see them for Christmas, I was not given leave by my platoon sergeant. So I have been unable to see them, except for the two days at Thanksgiving when Mario drove all four of them up here. I have been away from them for so long. I miss them very much. It’s been eight months since I was separated from them and I don’t know when I will be able to be with them again. That makes me nervous. It is scary.

“I had a loving community in Toronto. It was an emotionally healthy and supportive environment. Here, I am isolated. I go to counseling every day and to group every other day.