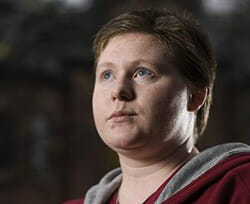 Yesterday, Iraq War resister Kimberly Rivera stepped out of the Miramar military confinement facility in San Diego, California, to the embrace of her husband Mario and their newborn son Matthew. “Kim is officially released and here with me. God bless all of you for your help and support. Love you all,” exclaimed Mario last night. Courage to Resist, Amnesty International, and tens of thousands of individuals worldwide unsuccessfully appealed to Fort Carson Senior Commander Brig. Gen. Michael Bills last month to use his clemency authority to grant Kim an early release. Shortening her sentence by only a couple of weeks would have allowed Kim to have her baby in a civilian hospital, and not be separated from her newborn. Kimberly served a ten month military prison sentence for having taken her family to Canada in order to refuse redeployment to Iraq in the early days of the illegal and immoral invasion. The Rivera Family now faces significant fiscal challenges getting their lives back on track.

Please consider a end-of-year, tax deductible contribution to the Rivera Family Support Fund to say thank you to Kim for her courage to resist!