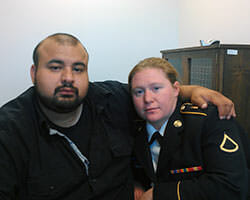 Please help us provide humanitarian assistance to these courageous objectors with your contribution to the Rivera Family Support Fund today!

On Monday afternoon, during a court-martial hearing at Fort Carson, Colorado, Kimberly Rivera was sentenced to 14 months in military prison and a dishonorable discharge after publicly expressing her conscientious objection to the Iraq War while in Canada. Under the terms of a pre-trial agreement, she will serve 10 months of that sentence. (Photo right: Mario and Kim Rivera moments before Kim was taken to away in chains. She is currently in the local county jail awaiting transfer to a military prison.)

Private First Class Kimberly Rivera deployed to Iraq in 2006 and sought asylum in Canada in 2007 because she decided she could no longer be complicit in the war. A mother of four young children—including two who were born in Canada—she was forced back to the United States of America by the Conservative government after receiving a negative decision on her pre-removal risk assessment. A Federal Court judge denied her request for a stay of removal, finding the possibility of her arrest and detention in the U.S. to be “speculative.” Rivera was arrested three days later, on September 20, 2012, as she presented herself at the U.S. border.

“Kim is being punished for her beliefs and for her comments to the press while she was in Canada,” said James M. Branum, the defense attorney who represented Rivera during the court-martial proceedings. “Because she spoke out against the Iraq War, Kim’s sentence is harsher than the punishment given to 94 percent of deserters who are not punished but administratively discharged. In the closing arguments, the prosecutor argued that the judge needed to give PFC Rivera a harsh sentence to send a message to the other war resisters in Canada and their supporters.”

The tremendous public outcry related to Rivera’s case shows the deep and broad support that Canadians continue to express for Iraq War resisters. In a period of 10 days leading up to the Rivera family deportation, 20,000 people signed a Change.org petition supporting the family. Faith, labour and human rights organizations spoke out, Amnesty International adopted Kim as a prisoner of conscience, and Archbishop Desmond Tutu published an opinion piece in The Globe and Mail newspaper calling the deportation order “unjust.”

In stark contrast to this outpouring of support, Conservative MPs cheered when the Rivera family’s removal was announced in the House of Commons.

“The Conservative government knew that Kim would be jailed and separated from her children when they forced her back to the U.S., yet they cheered her deportation,” said Michelle Robidoux, a spokesperson for the War Resisters Support Campaign. “They are out of step with the great majority of Canadians who opposed the Iraq War and who support allowing U.S. war resisters to stay in Canada.”

On February 1, 2013, the Federal Court of Canada issued a decision in the case of another U.S. war resister, Jules Tindungan, finding that the U.S. court-martial system “fails to comply with basic fairness requirements found in Canadian and International Law.” The Court also found that the Refugee Board failed to deal properly with evidence that soldiers who have spoken out publicly about their objections to U.S. military actions are subjected to particularly harsh punishments because of having voiced their political opinions.

“The sentence Kim received today underlines the concerns we have been raising all along, and what the Federal Court now acknowledges, that soldiers who speak out against unjust wars face harsher punishment and have no recourse within the U.S. military justice system,” said Robidoux.

“Prime Minister Stephen Harper and Minister of Citizenship and Immigration Jason Kenney were ardent supporters of the Iraq War, and they want U.S. Iraq War resisters punished. But Parliament has voted twice to stop these deportations, and the majority of Canadians believe Kim and the other resisters did the right thing. We will continue to fight to make sure this injustice does not happen to any other U.S. war resister who is seeking asylum in Canada.”

Please help us provide humanitarian assistance to these courageous objectors with your contribution to the Rivera Family Support Fund today!

Since 2008, there have been 11 Federal Court or Federal Court of Appeal decisions in favour of U.S. war resisters who are seeking permanent resident status in Canada:

January 3, 2004: Jeremy Hinzman, the first U.S. Iraq War resister to come to Canada, arrived along with his wife Nga Nguyen and their first child Liam.
May 2004: War Resisters Support Campaign founded in Toronto to advocate for a provision to be made to allow U.S. war resisters to the Iraq War to stay in Canada.
June 3, 2008: The House of Commons passed a motion directing the Government of Canada to immediately stop deportation proceedings against all U.S. Iraq War resisters and facilitate the resisters’ requests for permanent resident status.
June 27, 2008: An Angus Reid Strategies poll reveals that the majority (two-thirds) of Canadians agrees with the decision to let U.S. Iraq War resisters stay in Canada as permanent residents.
July 15, 2008: Robin Long becomes the first U.S. Iraq War resister to be deported by the Harper government.
October 2, 2008: Prime Minister Stephen Harper reversed his previous support for the U.S.-led invasion and occupation of Iraq stating during the English-language leaders’ election debate: “It was absolutely an error. It’s obviously clear the evaluation of weapons of mass destruction proved not to be correct. That’s absolutely true and that’s why we’re not sending anybody to Iraq.”
January 9, 2009: Jason Kenney was criticized by Amnesty International Canada and the Canadian Council for Refugees for biasing all U.S. resisters’ cases with his public “bogus refugee claimants” comment.
February 4, 2009: U.S. Iraq War resister Cliff Cornell was arrested when he crossed the border into the United States after exhausting all appeals to remain in Canada.
March 15, 2009: Members of Parliament Olivia Chow and Borys Wrzesnewskyj met with U.S. Iraq War resister Robin Long in the Naval Consolidated Brig Miramar near San Diego. Long was court-martialed and sentenced to 15 months in prison after being deported from British Columbia by the Harper government.
March 30, 2009: The June 3, 2008 motion was passed by Parliament a second time.
April 28, 2009: Cliff Cornell was sentenced to 12 months in prison and a bad conduct discharge after publicly expressing his conscientious objection to the Iraq War while in Canada. Prosecutors used footage of a television news interview with Cornell as evidence against him.
September 18, 2009: U.S. war resister and veteran Rodney Watson took sanctuary in the First United Church in Vancouver, BC, to avoid deportation by the Harper government. He remains there today.
July 6, 2010: Federal Court of Appeal issued its unanimous ruling in favour of Hinzman.
July 22, 2010: Citizenship and Immigration Canada, at the direction of Immigration Minister Jason Kenney, issued Operational Bulletin 202 which formalizes the bias against all U.S. war resisters in policy that immigration decision-makers must follow.
September 2010: Peter Showler, former Chair of Canada’s Immigration and Refugee Board, and Amnesty International Canada call on Immigration Minister Jason Kenney to rescind CIC Operational Bulletin 202 because it, “misstates the law and seeks to intrude on the independence of both IRB members and Immigration Officers,” and “implies that military deserters from the U.S. should be treated differently than deserters from other countries,” despite there being, “no basis in law for that proposition.”
April 5, 2011: Federal Court of Canada rules in favour of U.S. war resister and veteran Dean Walcott.
July 18, 2011: Federal Court of Canada rules in favour of U.S. war resister and veteran Chris Vassey.
August 30, 2012: Canadian government orders U.S. war resister Kim Rivera and her family to leave Canada by September 20th or face deportation. Kim is the first woman Iraq War resister to seek asylum in Canada. She and her husband Mario have four children, two of them born in Canada.
September 17th, 2012: Federal Court Justice Near denies Kim Rivera a stay of removal, stating that it is only “speculative” that Kim would be arrested and court martialed if she is forced to return to the U.S..
September 17th, 2012: In an opinion piece in the Globe and Mail, Archbishop Desmond Tutu writes, “Isn’t it time we begin to redress the atrocity of this war by honouring those such as Ms. Rivera who had the courage to stand against it at such cost to themselves?”
September 20th, 2012: Kim Rivera is arrested by U.S. authorities after voluntarily turning herself in at the border. She was charged with desertion.
September 20th, 2012: Conservative Members of Parliament break into applause upon the announcement of Kim Rivera’s forced return to the United States.
January 26th, 2013: Prominent Canadians publish open letter to the Prime Minister in support of U.S. war resisters in the Globe and Mail.
February 1st, 2013: Federal Court of Canada rules in favour of U.S. war resister and veteran Jules Tindungan.
March 22nd, 2013: Justin Colby sentenced to 15 months in confinement and a bad conduct discharge after voluntarily returning to the U.S. from Canada. A sealed pre-trial plea agreement means he is serving 9 months confinement at Fort Lewis, Washington.
April 29th, 2013: Kim Rivera sentenced to 14 months in prison by military court after publicly expressing her conscientious objection to the Iraq War while in Canada.