Resist the US-backed coup in Venezuela

A few resources for people interested in understanding what’s happening in Venezuela, and how to take action.

Message from Gerry Condon, Veterans For Peace National Board President:

You can find helpful resources on the website, including a ready made half-page flyer, where you can add your local information. Of course, feel free to produce your own flyer with your own message. The voice of veterans must be heard.

The U.S. regime change operation in Venezuela also presents an opportunity for the U.S. peace movement to step up our game.This includes Veterans For Peace, of course. The VFP Board of Directors is already discussing the possibility of having regular coordinated actions, monthly or quarterly, where all VFP chapters can act together. On February 23 we can begin to exercise our collective muscle while making a real contribution to the peace movement.

Veterans For Peace is outraged at the unfolding coup d’etat in Venezuela, which is clearly being orchestrated by the U.S. government. Two hundred years of blatant U.S. intervention in Latin America must come to an end.  Veterans For Peace was founded in 1985, in part prompted by the U.S.-backed “contra” war in Nicaragua, and U.S. support for the rightwing government in the bloody civil war in neighboring El Salvador.  We did not want to see another Vietnam War in Central America.

Years of increasingly crippling U.S. sanctions have succeeded in destabilizing the Venezuelan economy and created great unrest, division and migration.  The U.S. government encouraged Venezuelan opposition parties to boycott last year’s election. Now they are calling the election fraudulent, and attempting to install a little-known politician more to their liking.  This is part of a dangerous game that the U.S. continues to play throughout Latin America.

President Trump’s National Security Advisor John Bolton has called Venezuela, Nicaragua and Cuba the “Troika of Tyranny,” and boasted that they have now “met their match.”  Right-wing Cuban American Senator Marco Rubio of Florida, said to be deeply involved in orchestrating this coup, has implied that U.S. military intervention may be next. Responding to questions about possible military intervention, President Trump says that “all options are on the table.”  Trump and Vice President Mike Pence have openly encouraged the Venezuelan military to stage a coup and U.S. officials have even met with potential coup leaders.  Right-wing governments in Colombia and Brazil could also possibly be involved in U.S.-coordinated military action against the democratically elected government of Venezuela.

In our Statement of Purpose, Veterans For Peace promises to “restrain our governments from intervening, overtly and covertly, in the internal affairs of other nations.”  We call on our members in over 100 U.S. cities and internationally, to make their voices heard.  We must do all we can to prevent a bloody civil war from taking a huge toll on the Venezuelan people, and the peace-loving people of the hemisphere.

Call your political representatives, write letters to the editors, protest in the streets, resist yet another blow against democracy and human rights in this hemisphere and the world.

For more historical context details about the current situation in Venezuela, please read this Open Letter signed by 70 academics, Latin America experts and activists, including Veterans For Peace Advisory Board members, Medea Benjamin and Phyllis Bennis.

Venezuela has been the recent target of U.S. imperialism with a U.S.-backed coup attempt on Jan 23rd where Juan Guaido self-proclaimed himself (with support from the U.S.) the new president of the country in order to unseat the current democratically-elected president Nicolas Maduro. Will Griffin discusses the history of U.S. imperialism in Venezuela, the Bolivarian Revolution that is ongoing, and the current situation in the country with journalist Paul Dobson from Venezuela Analysis.

​​A Call for a Mass Mobilization to Oppose NATO, War & Racism and to Oppose US Intervention in Venezuela

Additional actions will take place on Thursday April 4 at the opening of the NATO meeting
no2nato2019.org 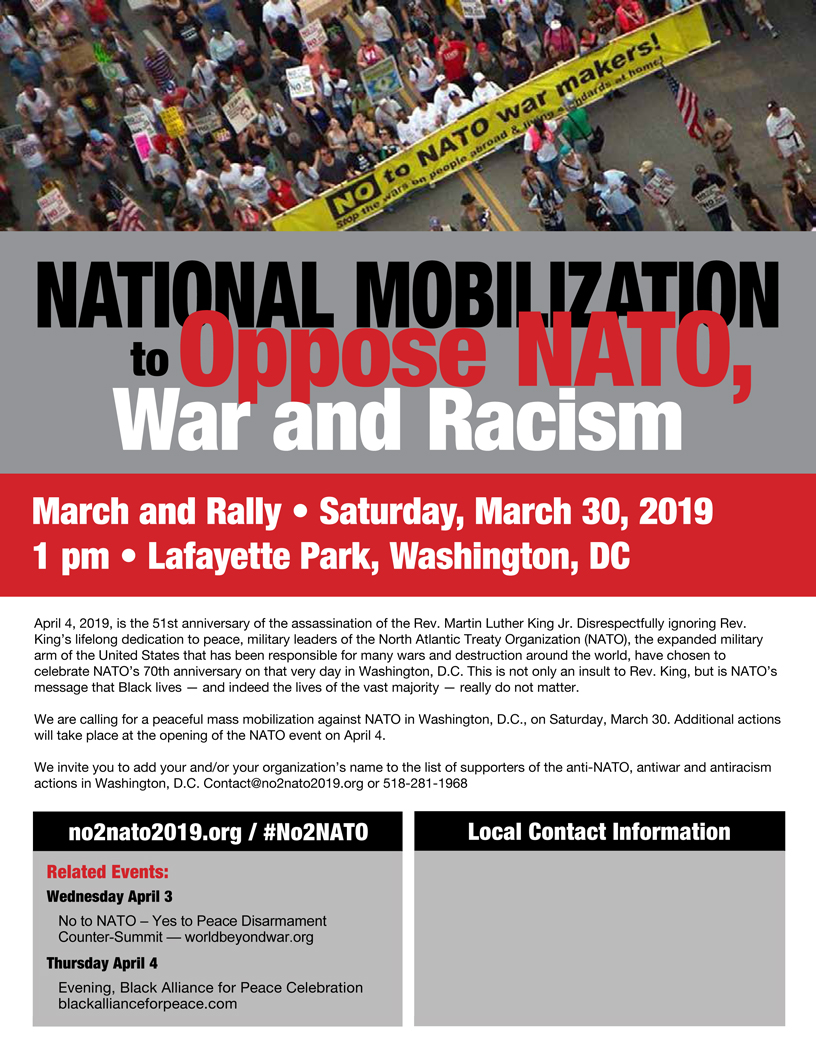 Statement on Attempted Coup in Venezuela

Uniformed soldiers and police have blocked off the streets. People are fleeing the city center, and gunfire sounds. The now-infamous coup is underway. While jets come screeching down and bombs drop, rebel soldiers take control of what remains of the presidential palace. The coup has succeeded. The president is dead. A general has taken power and declared martial law. Now soldiers patrol the streets, rounding up hundreds of citizens they see as loyal to the fallen government and to its party. People are forced in masses to the nearest football stadium for an unspecified time of confinement.

This is not Venezuela. This is Chile on September 11, 1973, but the path the US government is now on feels far too similar to what happened then. We’ve been down this road countless times before, and the consequences have always been devastating.

Chile’s violent coup came with the encouragement and endorsement of the Nixon Administration, who opposed the popularly elected and socialist government of Salvador Allende. In the lead-up to the overthrow, the U.S. funded a vicious media campaign meant to sow division and paint the Allende government as incompetent, corrupt, and irresponsible. The U.S. also imposed brutal sanctions, contributing to skyrocket inflation, fallen markets, food shortages, fear, and discontent. After the coup, Washington and London directly supported a fascist dictatorship responsible for tens of thousands of deaths and disappearances, the liberalization of the Chilean economy that brought huge profits to Western companies and their local acolytes, and brutal austerity for the poor, which helped cause the great income gap that plagues Chile to this day.

Today Venezuela finds itself in a similar situation. The nation is deeply polarized, divided along racial and socioeconomic lines, and falling global oil prices have spelled further disaster for a country whose main economic driver is oil. An already challenging dynamic has been exacerbated by US-imposed sanctions, a negative international media campaign, a virulent right-wing insurgency committed to overthrowing the governing party, and the threat of a military intervention from Washington. If Chile’s history has taught us anything, it’s hard to deny the likelihood of CIA involvement in the conservative opposition to Venezuela’s current government.

Recently, members of the Trump Administration including John Bolton, Mike Pompeo, and Mike Pence, along with legislators like Senator Marco Rubio, have implicitly called for the violent overthrow of the Maduro government and recognized, as president of Venezuela, a relatively unknown and unelected politician named Juan Guaidó.

As post-9/11 veterans, this isn’t the first time we’re seeing the parallels between past and present US policies. It’s not lost on us that sanctions preceded US military occupation in Iraq or that oil was a resource in question. Washington, Ottawa and European partners have aligned with local elites, a fragmented opposition, and regional right-wing governments to do everything in their power to oust the current government in favor of one that will serve their interests. And as it has before, we know this policy of US-backed regime change — rather than self-determination — could help lead to the destabilization of an entire country, if not the entire region, with grave consequences to the people of Venezuela for generations to come.

Through our military experience, we’ve witnessed firsthand the impacts of foreign interventions undertaken with little consideration for the civilians being affected. We’ve seen the chaos and destabilization that reverberates. Knowing that the people of Venezuela will continue to organize for their rights and for self-determination — whether or not they support Maduro — we oppose a US intervention that history proves would only serve to worsen, rather than advance, that cause.

We know unequivocally that the interests of the Trump administration do not align with the well-being of the majority of Venezuelans. As they do domestically, Trump’s interests instead lie with a wealthy minority and with international investors and corporations, eager to extract and exploit the region’s natural resources. If the Trump Administration is truly concerned with the plight of the Venezuelan people, we call on them to lift US-imposed sanctions on Venezuela, allow the opportunity for economic recovery without foreign manipulation, and to encourage a diplomatic — not military — solution to the ongoing situation.