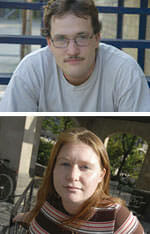 Update: Cliff Cornell’s deportation from Canada has been deferred until January 22. A number of resisters now face deportation in January and February (link: We Move to Canada)

Mr. Kenney, our family urges you to act in the spirit of this Holiday Season and take immediate action to stop the deportations of US war resisters Cliff Cornell and Kim Rivera (photos right) and her family.

Cliff has been told to leave Canada soon. In a few weeks, Kim and her family will likely be told to leave as well. Cliff is a quiet, hardworking young man who came to Canada in 2005 because he refused to serve in the illegal, immoral war in Iraq. He joined the US Army in 2002, before the invasion.

Kim did serve in Iraq, but being separated from her husband and children, and witnessing the horror of the war, convinced her to seek safe sanctuary with them in Canada. On November 23, she gave birth to her
third child, Katie Marie, who is cherished by her two other children Christian (6) and Rebecca (4). The Riveras hope to make their future in Canada, along with their new Canadian daughter. But on January 7, they must report to Immigration to be given a decision on their application for Humanitarian and Compassionate consideration. The family’s Christmas is shadowed by the fear that they will be told to leave Canada and face imprisonment in the USA.

Please do not let Cliff or the Riveras be deported to face punishment in the US! As Minister of Citizenship and Immigration, I urge you to respect the will of the House of Comons and the majority of Canadians, and implement the 2008 Parliamentary motion which calls on your government to “immediately implement a program to allow conscientious objectors and their immediate family members [.] to apply for permanent resident status and remain in Canada; and.the government should immediately cease any removal or deportation actions.against such individuals.”

PLEASE LET THEM LIVE IN PEACE IN CANADA!

Thank you for your consideration regarding this urgent matter.