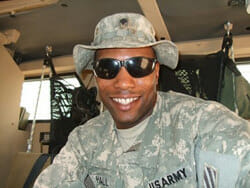 In a joyous victory for Specialist Marc A Hall and his supporters nationwide, this morning the US Army announced that the “Stop-loss” objector will not be court martialed next week at Camp Liberty, Iraq as scheduled. Instead, Spc Hall will be discharged immediately. In December, the Army jailed Spc Hall in retaliation for his formal complaint of inadequate mental health services available to him at Fort Stewart. The Army used an angry song that Spc Hall, a combat veteran of the Iraq War suffering from post traumatic stress, had produced criticizing the “Stoploss” policy as the pretext.

Specialist Hall’s civilian attorney, David Gespass, explained, “I believe we would have won the case, even in Iraq. While I’m gratified that the Army finally decided to discharge Marc, I’m appalled at the disregard it has shown for Marc’s wellbeing and fundamental rights for nine months. Whatever lip service the Army gives to its concern for its soldiers, its only real concern is insuring they risk their lives without questioning why. Marc’s greatest transgression was asking that question.” Mr. Gespass is the president of the National Lawyers Guild. 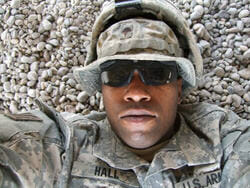 In a message to the supporters nationwide who organized a grassroots campaign on his behalf, Spc Hall provided the following message by phone from Camp Arifjan, Kuwait: “I’m out of the confinement facility! Thank you to everyone for all the efforts everyone made. Hopefully I’ll be home very, very soon. I appreciate all of the love and support so many people gave me through my ordeal.” Spc Hall, a member of Iraq Veterans Against the War, also enjoyed the support of the Veterans for Peace organization.

Jeff Paterson of Courage to Resist, an organization dedicated to supporting military objectors, noted, “Spc Marc Hall pled guilty today to producing a hip-hop song the Army didn’t like in exchange for his freedom. It’s utterly outrageous that Army spokespersons continued to slander Marc today. Despite the Army having stacked everything against Marc—including moving the scheduled trial from Ft. Stewart, Georgia to Iraq—supporters overcame each obstacle in order to provide Marc with a fighting chance for justice. In the end, we won.”