I took a personal, decisive action when I refused orders to report for Army active duty in the build up to the first Gulf War. I found the actual courage to resist by reading about Marine Jeff Paterson who took a step forward to sit down and refused. Genuinely, I didn’t anticipate what kind of turn my life would take after that. It was the beginning of an experience that continues to unfold. How do you continue to sustain that level of dedication and commitment to anti-militarism, social justice, and finding a way forward, towards a world beyond war? (Asking for a friend!)

While congress thankfully failed to expand mandatory military draft registration to young women a couple of weeks ago, we’ve not yet been able to end it once and for all (for young men). No one should be forced to sign up for a future war so unpopular that folks will not volunteer for it. For a refresher on what draft resistance looks like, check out the new documentary “The Boys Who Said No!” While some legislators blocked legislation that would include our daughters, let’s really level the playing field by demanding that they’re not entitled to our sons either.

Honestly? We’ve had a lot to contend with this past year. There’s the whole challenge of learning to live under the world wide pandemic while considering the threat to our environment, our very life force. We’re picking ourselves up and dusting off the debris after having survived a toxic administration whose effects are unfortunately still having an impact on our present and future. We’re coming to terms with the amount of work and challenges that lie ahead. The volume of what we have to sort through as a species is daunting. Our work often feels like a grain of sand on the beach, a thread in a quilt, or a small tree in a canopied forest.

I do get overwhelmed when nothing but bad news hits me. Like most people, I just want to get through another day, enjoying existence without having to remain hypervigilant in a world full of violence. I struggle with my own internalized empire, a defeatist critic that manifests in depression. Parsing this out, I recognize that this isn’t tenable. Being a resister requires me to lean into the challenge and continue to keep hope. In order to become a long-term advocate, I’m trying to look at every day as a new start.

Working on the Courage to Resist podcast series has been an opportunity for me to connect my experience full circle. I’ve been privileged this last year to listen to the stories of a younger generation of resisters, hear first hand accounts from veterans from other generations, and record my own story. It’s affirming to share a connection with people who’ve come before and will come after me, taking enormous risks to speak their respective truths.

To the resisters and veterans who have shared your stories through the podcasts, you understand that taking the action you did sets the bar pretty high. Let me say here with the deepest sincerity, “Thank you!”

It’s nearing the end of another calendar year, so it is again time for me to self-assess, “How do I know if I made a difference?” It’s probably residual from childhood, beholden to the holiday “naughty or nice” list, but I continue to evaluate with a mindset in which I take stock and make amends. As I age, it’s also an opportunity, in the beginning of winter, to plan for the future.

I volunteer and financially support Courage to Resist because every action I take contributes to a long, evolving continuum. I don’t have to get it all right today. I don’t know if my actions make a difference right now, but they may tomorrow. It genuinely helps me shift from a feeling of helplessness to hopefulness. It feels like an investment in our collective future. 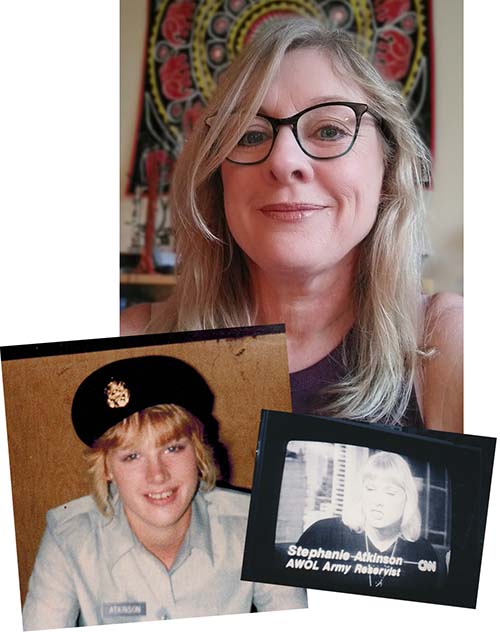 P.S. I leave you with a lyric from Kate Bush’s Cloudbusting, “Ooh, I just know that something good is gonna happen. I don’t know when, but just saying it could even make it happen!” Ooh, and donate today. Yes, please!