E/4 Catalino “Papo” Rodriguez, 30, from Aberdeen, MD surrendered at the Vietnam Memorial on Wednesday, August 8th to dramatize the need for adequate mental health care and disability payments for thousands of Iraq and Afghan war veterans, including himself.

Rodriguez had served 15 grueling months as a combat medic with the 10th Mountain (Light) Division from Ft Drum, N Y in 2008-09. He was required to treat on a daily basis severe injuries and process deaths among both soldiers and Iraqi civilians. At one point, three of his closest Army buddies were killed in an IED explosion and he felt deep (if irrational) guilt that he hadn’t been able to treat or protect them.

Back at Ft Drum, he experienced several mental conditions that are common to PTSD sufferers; hyper-arousal, sleep disturbance, flashbacks, and thoughts of guilt and worthlessness. In one recurring nightmare, the head of his younger brother appeared on the body of a severely injured Iraqi child.

Although his commanders were made aware of his mental problems, he received no therapeutic therapy–just prescriptions for several powerful drugs to quiet him or help him sleep. 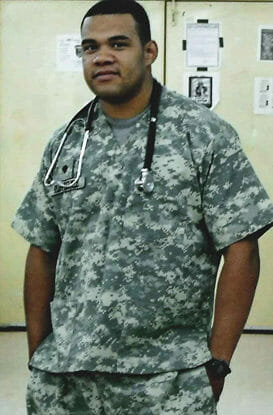 When he re-enlisted and reported to Walter Reed Army hospital in Washington, he hoped that his pleas for mental therapy would be answered, but they weren’t. He feared being sent back for another tour as a combat medic in Afghanistan because he feared that his shaky mental state would prevent him from providing first class care to his “battle buddies.”

Rosemary Masters, J.D.,L.C.S.W., a PTSD specialist based in New York City, evaluated Rodriguez by concluding that he suffers from both PTSD and Major Depression. She recommended that he receive “cognitive behavioral therapy combined with appropriate medication (because it’s) has been shown…to alleviate both depression and PTSD and is therefore considered the most appropriate treatment for these disorders.”

Masters also recommended that the military authorities take into account both his honorable service in Iraq and his impaired mental state at the time he was AWOL.

Following his remarks at the Vietnam Memorial, Rodriguez formally surrendered at the gates of the Walter Reed medical facility, accompanied by his civilian attorney, Tod Ensign, who is also Director of Citizen Soldier. At present, he is awaiting a decision by his commanders at the Army hospital as how they plan resolve his situation. He could be separated with an Honorable or Medical discharge or, worst case, he could be court martialled and imprisoned for his two year unauthorized absence from the military.

His US Senators from Maryland, as well as several Maryland House members have been alerted about this case and will be asked to render statements of support for his prompt discharge if they are needed.