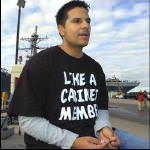 On December 6, 2004, Pablo Paredes refused to board the war-bound USS Bonhomme Richard leaving from San Diego,CA. Facing charges of “Missing Movement” and “Unauthorized Absence” Pablo was court martialed on May 11, 2005 for refusing to fight in a war, he challenged, was illegal.
Pablo Paredes’ court martial on May 11th, 2005 at the San Diego, California Naval Base was one of the motivations for a nationwide Day of Action to Support GI Resisters called for by Courage to Resist on May 10th and taken up by dozens of groups across the nation!

Pablo’s court martial in San Diego turned out to be an enormous political victory for Pablo and his supporters. Many creative actions in and outside the courtroom were mounted in Pablo’s defense. From brilliant testimony in court by witnesses and attorneys, to nightly political and cultural events, the mobilization around Pablo’s case was truly inspirational! Photos: Defending Pablo and protesting war

Due the strong legal case put forward as well as nationwide political pressure, Pablo Paredes was sentenced to no jail time for his act of courageous resistance. He was convicted of “missing movement” for failure to board ship with his unit, and sentenced to two months restriction, three months hard labor without confinement, and reduction in rank to E-1.

In early October, ten months to the day after he refused to board the war-bound USS Bonhomme Richard, and some 9 months before the scheduled expiration of his active duty obligation, Pablo Paredes is once again a civilian! On October 4, he completed his court martial sentence, and on October 6, he was discharged. Pablo is continuing his legal battle with the Armed Services, and his lawyers are currently challenging the Navy’s rejection of Pablo’s request for Conscientious Objector status in the Federal Court system.

For more information on Pablo Paredes and the history of his case: www.DefendPablo.org