Supporters cause ruckus over Manning at President’s fundraiser 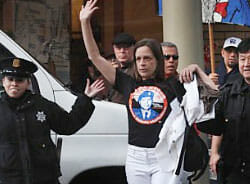 This morning President Obama met with 150 donors for his 2012 reelection campaign over breakfast at the St. Regis Hotel in San Francisco, California. However, the event turned interesting when nearly two dozen of his contributors pressed the president in song on the unjust confinement and tortuous treatment of alleged WikiLeaks whistle-blower US Army intelligence analyst PFC Bradley Manning.  As the President spoke of the creative organizing that won him the 2008 election, over 10% of the attendees held up “Free Bradley Manning” signs and launched into a song entitled “Where’s our change?” As Secret Services agents attempted to grab the signs, Speaker of the House Nancy Pelosi, California Lt. Gov. Gavin Newsom, and President Obama looked on. (Video)

After the song, fundraiser attendee Logan Price had an opportunity to speak to the president for a few minutes. “I explained to the president that Bradley Manning and WikiLeaks is in fact the Daniel Ellsberg and Pentagon Papers of my generation. We need to stand up for whistle blowers. President Obama disagreed with me, noting that he ‘could not conduct open source diplomacy.’ But when I asked him about the democratic revolutions in the Middle East, he backpedaled.”

“Bradley Manning’s case raises a number of important questions regarding civil liberties, the Internet, and President Obama’s campaign promises,” explained fundraiser attendee Emma Cape. “I hope that the President will finally make this right. Bradley Manning has been punished enough already. He needs to be freed.”

Michael Thurman, a recently discharge veteran of the US Air Force, explained, “I had hoped President Obama would end our nation’s occupation wars.  I’m disappointed, but what the military has been allowed to do to Bradley Manning—a 23-year-old Soldier who is accused of doing nothing more than telling the truth—is crazy.” Mr. Thurman also participated in the surprise fundraiser speak out.

More than a half million people have already signed a statement decrying PFC Manning’s treatment as a “violation of his constitutionally guaranteed human rights, and a chilling deterrent to other potential whistle-blowers committed to public integrity.”  Over 300 of America’s top legal scholars have called on the Obama Administration to end the torturous treatment of Bradley Manning. The list of signatories includes Laurence Tribe, a Harvard professor who taught constitutional law to Barack Obama. Prof. Tribe was a key backer of his 2008 presidential campaign, and was most recently a legal adviser in the US Justice Department. 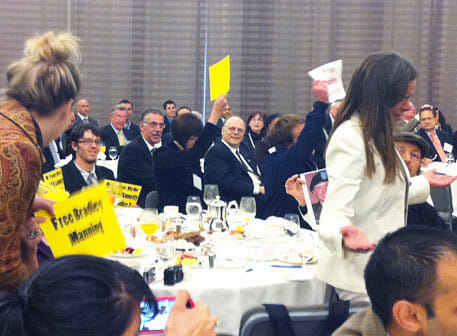