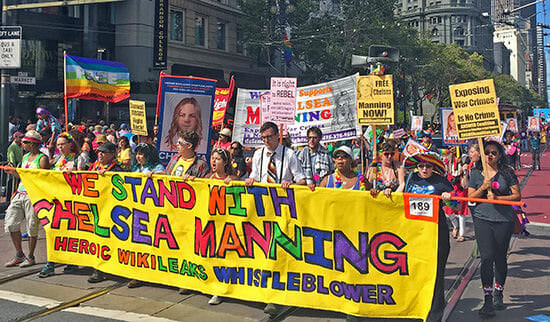 President Obama has commuted all but four months of the remaining prison sentence of Chelsea Manning, the former US Army Intelligence Analyst serving 35-years for releasing classified information. Chelsea’s attorney Nancy Hollander, who spoke with President Obama’s counsel earlier today, confirms that “Chelsea will walk out of Fort Leavenworth a free woman in four months, on May 17th.”

The Chelsea Manning Support Network applauds this decision by outgoing President Barack Obama, and extends our heartfelt gratitude. A commutation can not be reversed by a future president.

“Today’s fantastic news goes a long way to making amends for the brutal treatment Chelsea was illegally subjected to while awaiting trial at the Quantico Marine Brig. It’s tragic that Chelsea had to spend 7-years imprisoned for releasing documents that should never have been classified in the first place, and were clearly in the public interest,” stated Courage to Resist Project Director and Chelsea Manning Support Network co-founder Jeff Paterson. “All of us who worked on Chelsea’s behalf are overjoyed.”

The Chelsea Manning Support Network was founded in the weeks following Chelsea’s arrest in Iraq in May 2010. The Network covered 100% of the legal fees associated with her pretrial hearing, court martial trial, and raised a significant amount toward the legal costs of her appeal. Many days during her trial, the courtroom was packed with supporters wearing “truth” shirts.

“Over the last few years, I’ve come to know Chelsea as a deeply intelligent, sensitive woman who doesn’t deserve to spend decades in prison. I often feared that any more time behind bars would be devastating for Chelsea, or potentially even lethal, especially with President-Elect Trump taking office. Soon, she’ll have a chance to live the life she’s been denied for almost seven years,” Rainey Reitman, co-founder of the Chelsea Manning Support Network.

In addition to fundraising, the organization worked to raise awareness of Chelsea’s case. The Support Network held hundreds of rallies around the world, from San Francisco and London. Chelsea’s supporters became regular participants in yearly pride parades the last several years. In addition, the Support Network placed billboards in Los Angeles and Kansas City, ran a full-page New York Times ad, and helped generate over one million petition signatures in support of Chelsea’s release.

“In conversations Chelsea and I had while she was imprisoned, I learned that she’s not only driven by principles, but that she believes in the foundations of America’s government. She dreamed about attending graduate school, and helping to research ways that government could use technology to improve transparency and public participation. Whatever she chooses to do now, the world is better for having a bright young person free to pursue a meaningful life,” noted former campaign manager Emma Cape.

“I believe that the support for Chelsea demonstrated that whistleblowers who oppose injustice will not face powerful government retribution alone,” declared Rainey Reitman. “Today’s victory is a victory for all those who stood with Chelsea Manning.”