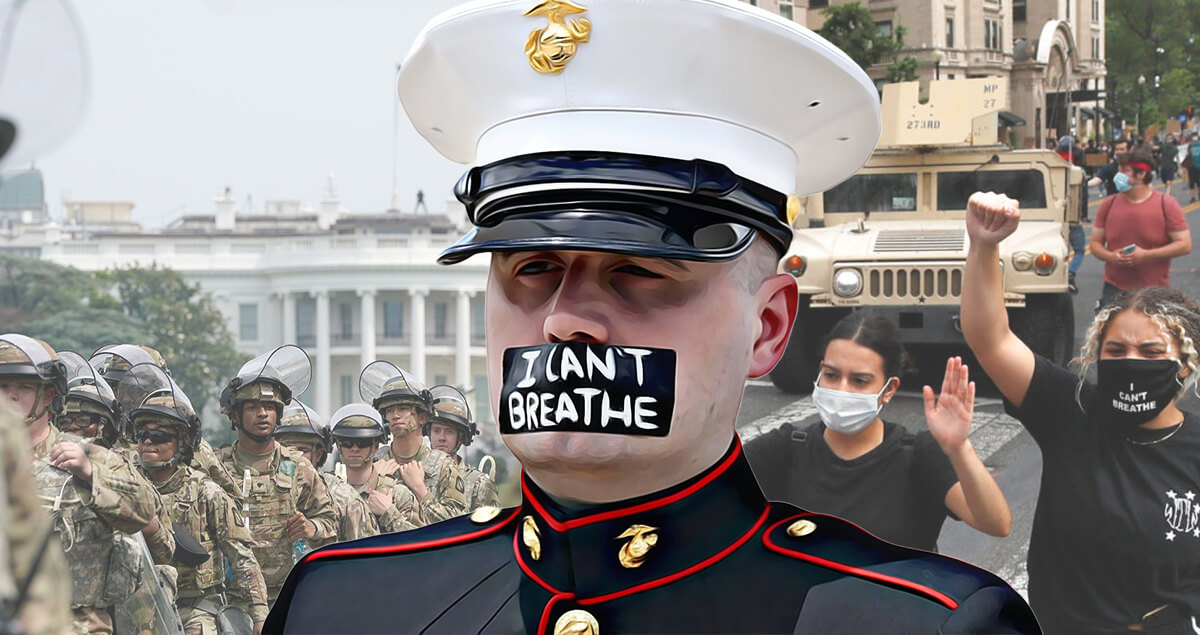 When you are in the Army National Guard, it takes courage to disobey a direct order from the Commander-in-Chief. But after being ordered by President Trump to deploy to cities around the country in preparation to attack and disperse protesters, violating the constitutionally guaranteed right to peaceful assembly, that is exactly what some National Guards members have decided to do. And now, facing potential disciplinary action and court martial, they need our support.

Will you support a legal defense for National Guard members who are refusing Trump’s illegal order to attack and endanger peaceful protesters?

Courage to Resist is assisting members of the National Guard who resisted Trump’s orders to violently attack people on the streets of Washington DC lawfully protesting racial injustice. Your contributions will go toward legal services, logistical support and public advocacy to defend these brave men and women against potential court martial and imprisonment. As Trump threatens to deploy more military service people against demonstrators nationwide, the number of those needing assistance is likely to grow. Thank you for your support today. More information

After failing to condemn the police murder of George Floyd, which has sparked protests in 430 cities and counting, on June 1 President Trump decided to use military and police to blast peaceful protesters in front of the White House with rubber bullets, noxious gas, and flash bangs.2 This isn’t an isolated incident. Trump has a history of praising authoritarians who have killed and brutalized protesters Thirty years ago, he even complimented China’s massacre of pro-democracy protesters at Tiananmen Square.3

Trump’s threat to send the National Guard to cities around the U.S. to crackdown on protests poses a direct threat to our democracy and freedom of speech. Resisting these orders deserves our respect. But those who are willing to disobey these orders need your support now to fight back against the threat of court martial and imprisonment.

Your contribution can help the young men and women fighting back against Trump’s illegal orders to resist court martial and imprisonment. Take action today!

One young man who is resisting Trump’s orders originally joined the National Guard with hopes to join medical missions assisting in natural disasters. Now he says, “I can’t do it. Even looking at my uniform is making me feel sick that I’m associated with this, especially after [the National Guard unit] shot that man who owned that barbecue shop [in Louisville, Kentucky].” He added, “I live with the history of Kent State. I’m not being a part of that,” referring to a 1970 incident in which the National Guard shot and killed students who were peacefully protesting the Vietnam War.4

The weapons that police and the National Guard are today being instructed to use against protesters, like rubber bullets, are classified as “less-lethal” vs. non-lethal, and have already caused serious injury, permanent vision loss, and death. Tear gas, used in recent days across America, is banned internationally as a chemical weapon.5

Another National Guard member who is resisting these orders says, “I feel that I cannot be complicit in any way when I’ve seen so many examples of soldiers and police acting in bad faith … No aspect of my training has touched on this subject … We have not had any training or conversation relating to de-escalation tactics.”

We are living in a historic time. From police brutality, to the COVID-19 crisis, to growing economic inequality, to voter suppression there are many reasons for citizens to mobilize to defend our democracy. Trump’s threats to suppress protest are those of an aspiring authoritarian. It’s essential we support those who set a strong example by resisting these orders.

Will you support a strong legal defense for the young men and women refusing Trump’s illegal orders to suppress the Black Lives Matter protests?

Thank you for supporting the troops with the courage to resist!