Military veterans speak out against war

Iraq combat veterans, Agustín Aguayo and Camilo Mejía, will be joined by fellow war resisters Pablo Paredes and Robert Zabala for a series of Northern California events May 9-18.

Just weeks after being released from a military stockade in Germany for refusing redeployment to Iraq, Agustín Aguayo will be joined by fellow war resisters on a Northern California speaking tour. Agustín served nearly eight months in prison after fighting for nearly three years to be recognized as a conscientious objector. Agustin will explain for the first time why he chose jail instead of redeploying to Iraq.

Camilo Mejía was one of the first Iraq combat veterans to refuse to return to Iraq and served almost nine months in prison for his stand against war. In his upcoming book, “Road from ar Ramadi; The Private Rebellion of Staff Sergeant Camilo Mejía,” Camilo gives an inside view of what it felt like to be a soldier on the ground in Iraq. Camilo’s book will be available at his events.

Pablo Paredes refused to ship out in support of the Iraq War at the San Diego Naval Station in 2005. He is now a GI rights counselor and counter-recruitment activist. Robert Zabala is a Marine recently ordered discharged as a Conscientious Objector (CO) by a federal judge after fighting for nearly four years to be recognized as a CO.

Calendar of Events May 9-18 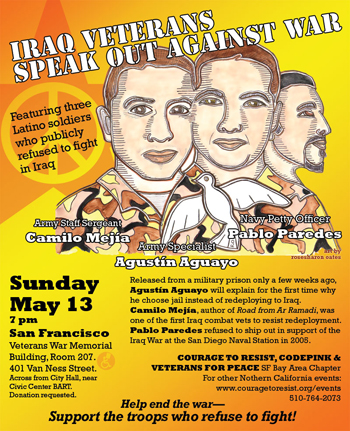 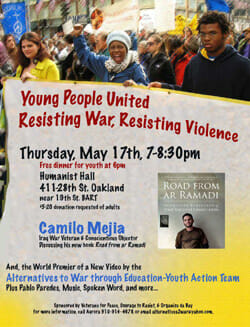