Military Counter-Recruitment in the Time of Covid 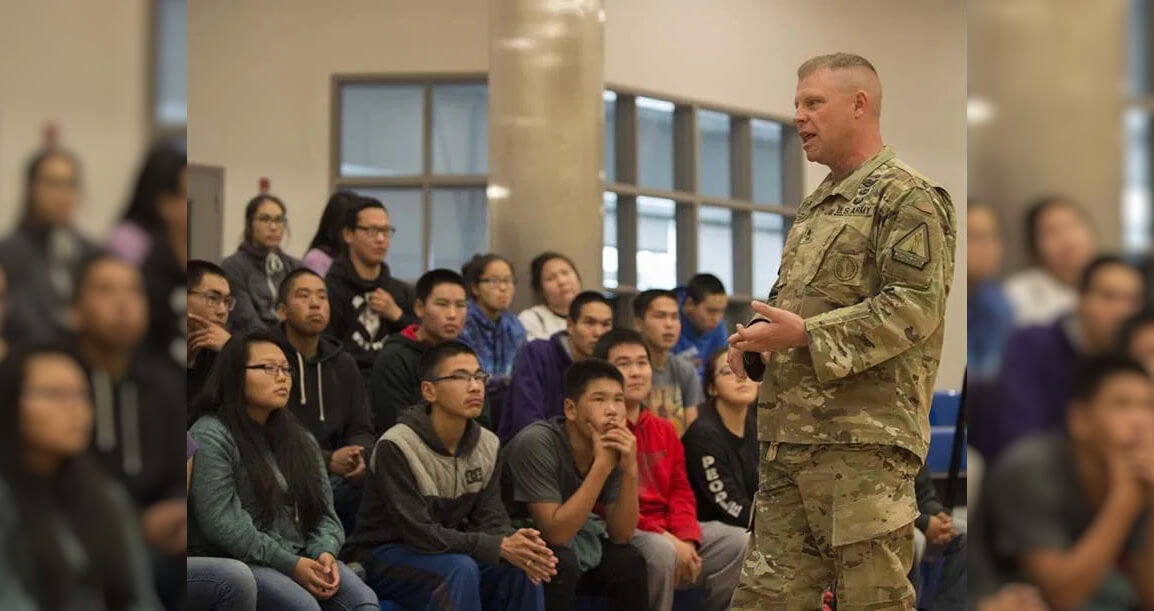 In 2016-17, the U.S. Army visited Santa Maria High School and nearby Pioneer Valley High School in California over 80 times. The Marines visited Ernest Righetti High School in Santa Maria over 60 times that year. One Santa Maria alumnus commented, “It’s as if they, the recruiters, are on staff.” A parent of a high school student at Pioneer Valley commented, “I consider recruiters on campus talking to 14 year olds as “grooming” young people to be more open to recruitment in their senior year. I want my daughter to have more access to college recruiters and for our schools to promote peace and nonviolent solutions to conflict.”

This is a sample of what high schools, particularly in rural areas, experience nationwide, and the difficulty of confronting the presence of military recruiters on campus. While our nonprofit counter-recruitment group, Truth in Recruitment, based in Santa Barbara, California, views such military access as beyond excessive, as far as the military is concerned, now that the pandemic has closed campuses, those were the good old days. The Air Force’s Recruiting Service Commander, Maj. Gen. Edward Thomas Jr., commented to a journalist at Military.com, that the Covid-19 pandemic and high school shutdowns nationwide have made recruiting more difficult than previously.

Thomas stated that in-person recruiting at high schools was the highest yield way to recruit teenagers. “Studies that we’ve done show that, with face-to-face recruiting, when somebody is actually able to talk to a living, breathing, sharp Air Force [noncommissioned officer] out there, we can convert what we call leads to recruits at about an 8:1 ratio,” he said. “When we do this virtually and digitally, it’s about a 30:1 ratio.” With closed recruiting stations, no sporting events to sponsor or appear at, no hallways to walk, no coaches and teachers to groom, no high schools to show up at with trailers loaded with militarized video games, recruiters have shifted to social media to find likely students.

Yet the school shutdowns, combined with the economic uncertainty during the pandemic, have only made vulnerable populations more likely to enlist. The military also is aware of this. An AP reporter noted in June that in periods of high unemployment, the military becomes a more enticing option to teens from impoverished families.

This is apparent from our work. Truth in Recruitment has been working to reduce recruiter access to students in Santa Maria high schools where the demographics on some campuses are 85% Latinx students, many from immigrant farmworkers working in the fields. Nevertheless, the Santa Maria Joint Union High School District (SMJUHSD) was pleased to report in June 2020 that sixty students from all the area high schools had decided to enlist.

As a group dedicated to regulating the presence of military recruiters on campuses, and their access to students’ private information, we are seeing the consequences of both the pandemic and recruiters’ aggressive social media campaigns. Under the No Child Left Behind Act (NCLBA) of 2001, high schools that receive federal funds must allow recruiters to have the same access to students as employers and colleges. This law is often cited when school districts say that they cannot regulate recruiter access to their students and schools. But the key word in the law, which shows what is possible, is the word “same.” As long as school policies apply the same regulations to all types of recruiters, districts can implement policies that regulate recruiter access. Many school districts across the country have passed policies regulating recruiter access, including Austin, Texas, Oakland, California, the San Diego Unified School District, and the Santa Barbara Unified School District, where Truth in Recruitment is based.

According to federal law, while districts are required to provide student names, addresses, and parents’ phone number, families have the right to “opt out” to prevent schools from releasing to the military further information about their children. However, now that teens have their own phones, recruiters have direct access to them – following them on social media, texting and emailing them privately – and have access to their friends in the process. Because of this, parental oversight is circumvented and a family’s privacy rights are ignored. Recruiters not only gain access to student’s through their phones, but through ‘surveys’ and sign up sheets, where they ask questions such as “citizenship status?” and other confidential information.

Recruiters online tactics can be dubious. For one example, The Nation reported that on July 15, 2020,the Army’s Esports team on Twitch advertised a fake giveaway for an Xbox Elite Series 2 controller, valued at more than $200.When clicked, animated giveaway advertisements in the Army’s Twitch stream chat boxes led users to a recruiting web form with no mention of any giveaway.

Recent events reveal that building our military forces does not strengthen our country’s security. The COVID-19 pandemic has shown that the biggest threats to our nation cannot be stopped with military methods. It has also shown the risks that troops face from working and living close together, making them vulnerable to this deadly disease. In WW1, more troops died from disease than in combat.

The police killings of unarmed black people have also shown the ineffectiveness of force to ensure the safety of our communities. A young black woman on the news testified that she had considered joining the police force but changed her mind after seeing the systemic abuse of police departments, both in the killing of George Floyd and the way police brutalized peaceful protesters. Even more pointedly, the death of US Army SPC Vanessa Guillen, murdered by a fellow soldier at Ford Hood in Texas, after first being sexually harassed by an officer, indicates the unstated dangers that recruits can face.

How can those of us who are opposed to the current militarization of society in general and high schools in particular curtail the military’s push to meet recruitment “quotas?”

Because of the pandemic, TIR has had to adjust strategies and procedures; after winning the right, with help from the ACLU So Cal affiliate, in 2019 to table at high school events in Santa Maria – we are now faced with school closures. So instead, we have been conducting meetings, events and presentations remotely, utilizing services like Zoom. In fall of 2020, we met with the SMJUHSD and the new Superintendent in Santa Maria to establish a working relationship and so progress in our goals.

Throughout the pandemic, Truth in Recruitment has given online presentations to students and local community groups. The focus has been on the stakes of military careers and our campaign to regulate recruiters’ access to students. On social media, we have regularly posted about military recruiting tactics – in order to give students a more balanced view of what life in the military can mean and to recognize that they can choose nonmilitary career options. The presence of military recruiters on high schools does not serve an educational purpose. Our goal is to build student and family awareness so they can make educated choices about their future.

Kate Connell is the director of Truth in Recruitment and the parent of two students who attended Santa Barbara schools. She is a member of the Religious Society of Friends, Quakers. Along with parents, students, veterans, and other community members, she successfully led the effort to implement a policy regulating recruiters in the Santa Barbara Unified School District.

Fred Nadis is an author and editor based in Santa Barbara, who volunteers as a grant writer for Truth in Recruitment.

Truth in Recruitment (TIR) is a project of the Santa Barbara Friends (Quaker) Meeting, a 501(c)3 nonprofit. TIR’s goal is to educate students, families, and school districts about alternatives to military careers, inform families of their children’s privacy rights, and advocate for policies regulating recruiter presence on campuses.