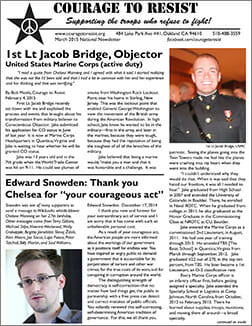 Please donate today to support the troops who refuse to fight!

The Courage to Resist March 2015 national newsletter (PDF) is arriving in mailboxes across the country this week. In this issue you can read about active duty Marine officer Jake Bridge talk about his appreciation for Chelsea Manning’s heroic actions, the outcome of resister Sara Beining’s court martial, former Staff Sgt Hickman’s attempts to expose murder at Gitmo, legal update from exiled objector Andre Shepherd, and a summary of “what’s next” for Chelsea Manning.

We also enclosed a recent hand-written letter from Chelsea Manning to supporters (PDF), like you.

Aside for forcing us to regularly evaluate and summarize our efforts, the point of these newsletters is to help us raise funds to sustain our work in support of the troops who have the courage to resist. So, please donate today!

Folks who we mail these newsletters to have have either donated, or contacted Courage to Resist for the first time, recently. Folks often ask, “Why even print and send actual hard-copies any more?” In order to for us to carry out our mission, successful and systematic fundraising is a necessity. Online appeals still only account for about half of our funding.