Chelsea Manning on her opposition to the grand jury process

I wish I could be there in person, but I appreciate this opportunity to summarize for you my letter to the court that ordered me to be confined, explaining why grand juries are so dangerous. I am not alone in objecting to the grand jury as a dangerous relic that has evolved in ways that increase its power without increasing its protections. I refuse to participate in a process that has clearly transformed into something that violates the spirit, if not the letter of the law.

I am certainly not alone in thinking that the grand jury process, which at one time acted as an independent body of citizens along the lines of a civilian police review board, has slowly transitioned into an unbridled arm of the police and prosecution in ways that run contrary to its originally intended purpose.(1)

Early grand juries acted independently, as investigations by citizens, ostensibly to protect citizens, not only from unjust indictments, but from unjust laws. In 2019, the federal grand jury exists as a mockery of the institution that once stood against the whims of monarchs. It guts the Fourth Amendment’s protections against unreasonable search and seizure, and the Fifth Amendment’s guarantees of due process. Today’s grand juries do not safeguard such fundamental rights and are easily subject to abuse.

The tradition of using grand juries to jail political dissidents and activists is long. The ability of grand juries to be abused or used for political ends is entrenched and perpetuated by the fact that jeopardy doesn’t attach with a grand jury, so prosecutors can repeatedly bring the same charges.

Despite laws that require prosecutors to show new evidence or that it is in the public interest to extend or reconvene a grand jury, this is hardly an obstacle. For instance, Thomas Jefferson had to convene three separate grand juries in order to indict Aaron Burr for sedition – but he was able to continue to convene those grand juries until he obtained his desired indictment.

During the McCarthy era, when people were publicly interrogated about their beliefs and associations, the public was eventually outraged, and the McCarthy hearings are widely seen as a disgraceful episode of modern history. However, these kinds of interrogations have now returned, and happen routinely, under the modern grand jury system.

The investigative grand jury as we know it was developed during the Nixon years, purportedly to battle organized crime, although it was promptly used to subpoena members of anti-war groups, the women’s movement, and black liberation groups. Prosecutors issued subpoenas in conjunction with grants of immunity in order to compel testimony, and routinely had resistant activists imprisoned for contempt. In 1968, a San Francisco Grand Jury was asked by Mayor Alioto to investigate the Black Panther Party. Although they refused, and the foreman even gave a press conference about political overreach, just a year later, in 1969, a new grand jury began an investigation.

The grand jury subpoena, combined with compulsory immunity, gives unrestrained powers to U.S. prosecutors to oppress activists and their communities. Although, generally, people have no obligation to cooperate with law enforcement investigations, in the context of a grand jury subpoena, people who refuse to talk about their first amendment beliefs and associations can be locked away, or fined, as sanctions for their principled refusal.

The concept of a grand jury in which prosecutors subpoena activists and jail them for refusing to comply with the subpoena stands in stark contrast to the institution contemplated in the Constitution. The drafters of the U.S. Constitution, despite their many flaws, did not set out to short-circuit due process protections.

The drafters never intended the grand jury to function as it does today. The grand jury imagined by the drafters of the fifth amendment did not involve a prosecutor and bears no resemblance to what we see today, where more than 99.9% of indictments sought are granted. Consider that it is more than six times as likely that you will be struck by lightning than that a federal grand jury will decline to indict.

A grand jury’s secret proceedings lend unearned legitimacy to prosecutorial decisions that protect the powerful from accountability and over-punish the marginalized. Because prosecutors can compel people to show up and testify or produce documents to the grand jury without having to show probable cause, their unmonitored subpoena power functions to let them side-step the Fourth Amendment’s protections against unreasonable searches and seizures.

The very threat of the secret proceeding is in itself terrifying to people. The secrecy of grand jury proceedings fuel paranoia and fear, running contrary to our ideals of open courts. When people learn about the secrecy of grand juries, they are often surprised that they are constitutional and compare compare them to the Court of Star Chamber, which existed in England from the 15th to 17th centuries. Suprisingly, apart from the fact that the grand jury itself does not impose punishments, the biggest difference between the grand jury and the Court of the Star Chamber is that the Star Chamber proceedings were in fact largely open to the public.

Another, more sinister thing about grand juries is that they don’t indict law enforcement. For example, in Dallas over a stretch of several years, more than 80 police shootings came before grand juries. Only one returned an indictment.(2) Grand juries have protected police officers since the slave patrols. They were used to indict abolitionists, but not people capturing and re-enslaving people seeking freedom from bondage. They were used to indict reconstructionists, while actively protecting lynch mobs. Additionally, in the Antebellum South, grand juries routinely indicted anti-slavery activists for sedition, while those in the North sometimes refused — but charges would re-presented to new grand juries until they stuck.

Grand juries can also be used to coerce defendants to give up their trial rights and take pleas, both by threatening to indict for more severe charges than are warranted (which we know can be done easily), or by threatening to call a defendant’s loved ones before a grand jury as witnesses.

The fact that grand jury subpoenas are a source of community trauma is widely known, and this fact was certainly known to Aaron. It is simply unreasonable to think he was not conscious of the specter of a grand jury investigation, intruding into the lives of his friends, family, and professional community, as just one of the many ways in which his life might be disrupted by a runaway prosecutor.

Although prosecutors will claim that grand juries are necessary and just simply because they are described in the constitution, the truth is that there were many flaws and indefensible compromises in the Constitution that we have since remedied. Human slavery, subordinate civil status for women, segregation, and the disenfranchisement of those who were not land owners, are all identified in the Constitution, and have since been addressed accordingly. Many of these practices might have continued to be seen as “normal” or “necessary,” had not been challenged by the tireless work of millions of people taking bold and dangerous action to make them obsolete.

There are several alternatives to grand juries that can be used for prosecuting people that are already in use by most other countries around the world. In fact, the United States and Libera are the only two countries still using them. In countries that used to have grand juries, including England, (which abolished them entirely by the 1940s), Scotland, Ireland, Canada, Australia, New Zealand, South Africa, France, Belgium, Japan and Sierra Leone, grand jury proceedings have been replaced by an open and adversarial “preliminary” or “committal” hearing system. Even in the United States military, the Uniform Code of Military Justice, 10 U.S.C. §801 et seq, sets forth procedures for preliminary hearings, rather than grand juries, providing service members with significantly more protections than the average person.

Preliminary hearings throw open the doors to the best of all disinfectants: sunshine. Nearly every country that used grand juries replaced it with these hearings, which save time and expense, don’t criminalize refusal to comply with prosecutorial whims, and better equip all parties to prepare for fairer and more balanced inquiries into the truth of matters. There exists no shortage of due process and nothing prevents a witness who wishes to remain anonymous from speaking to law enforcement or the prosecution.

I believe in due process, freedom of the press, and a transparent court system. I object to the use of grand juries as tools to tear apart vulnerable communities, and I object to this grand jury in particular as an effort to frighten journalists and publishers, who serve a crucial public good.

Thank you all so much for listening, as always, for your wonderful letters and messages of support. Letters mean so much for those of us in jail, cut off from the ones we love and depend on. They let us keep a continuity of feeling like we are still part of a community out there. 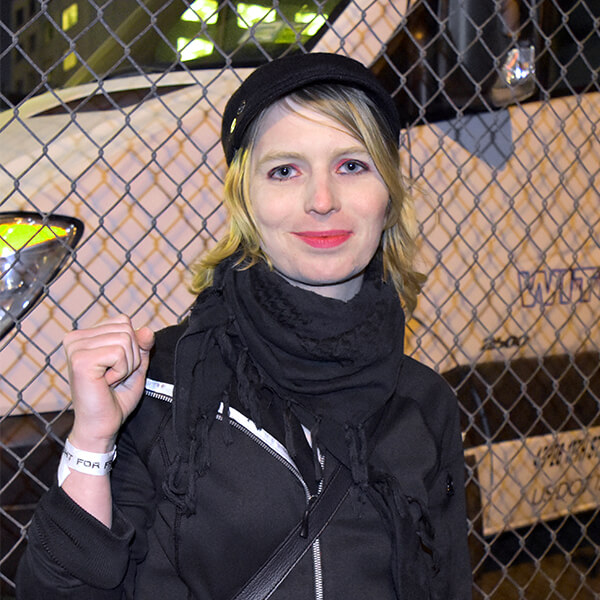 As read to the audience, on Saturday, November 9, 2019 at the Aaron Swartz Day Evening Event, at the Internet Archive, in San Francisco, California, as published here.

Update by Courage to Resist

Chelsea Manning remains incarcerated for refusing to testify before a federal grand jury about events related to her 2010 disclosures.  On August 5, 2019, Judge Anthony Trenga denied Chelsea’s “Motion to Reconsider Sanctions”, imposed after he found her in civil contempt of court.

The judge is currently fining Chelsea $1,000 per day for her refusal to collaborate with the case against Julian Assange.  Despite the fact that Chelsea is currently deeply in debt, and can’t work while jailed, Judge Trenga concluded that his fines are “coercive”, and not “punitive”, which wouldn’t be allowed.

Chelsea will remain jailed until August, 2020 at the Alexandria, Virginia jail. She’ll owe the government a total of $441,000 in fines when she’s finally released.

It’s the holiday season and Chelsea would love to hear from you.

She can NOT accept books or cards.
She can receive letters, as well as newspapers.

“Chelsea’s legal team continues to pursue all legal options for her release, and for the transformation of the grand jury process in general. They — and Chelsea — have been able to keep everything going because of you. Due to your continued support, we believe we are on the cusp of some exciting legal developments, and we look forward to sharing news of those with you in the near future.”
Donate

2. A grand jury could ‘indict a ham sandwich’, but apparently not a white police officer – The Guardian, Tuesday 25 November 2014 – As reprinted in The Independent: https://my.independent.co.uk/news/world/americas/a-grand-jury-could-indict-a-ham-sandwich-but-apparently-not-a-white-police-officer-9882529.html