Long time passing: Mothers speak out about war and terror 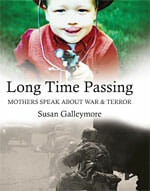 By Courage to Resist and Susan Galleymore. April 29, 2009

Courage to Resist co-founder Susan Galleymore made international headlines by taking the extraordinary and even dangerous step of traveling to Iraq to visit her US Army son stationed on a military base in the so-called Sunni Triangle, north of Baghdad. She is now on tour to promote her new book “Long Time Passing: Mothers Speak Out About War and Terror”.

What Susan found in Iraq – the horrors of war which was at once heartbreaking and compelling – challenged her to continue her journey interviewing mothers in war zones including Iraq, Israel and the West Bank, Lebanon, Syria, Afghanistan and the US. These powerful first-person stories offer dramatic insight into the impact of war on mothers, families, communities, and cultures around-the-world.

As I wrote in Long Time Passing, when “my son was deployed to Afghanistan in 2003 I awoke from nightmares almost every night: the knock on the door, uniformed military personnel on the doorstep, “We’re sorry to inform you…,” images of my son disabled like the soldier in Johnny Got His Gun, bombs raining on a family’s home while a mother screamed out her children’s names….

My first real encounter with the vast horror that is war was meeting Holocaust survivors when I was a child. Then I had reacted by imagining how I would steel myself for hearing the worst news. But now, try as I might, I couldn’t hold for more than a few seconds the thought of my own child’s direct involvement: the pain was overwhelming. I couldn’t imagine how mothers could—how I might have to—adjust to the unthinkable: the death or maiming of a beloved child, the nightmare vision of that child killing or maiming others.”

As an adult immigrant to the United States I didn’t grasp that my own children were candidates for military recruitment. Surely, I thought, a volunteer military was, well, voluntary. I was unaware of, so did not consider, the marketing efforts and exorbitant amounts of money the US military poured into maintaining the veneer of “volunteer”.