A lesbian soldier who deserted the U.S. military appealed to a Canadian judge for asylum Tuesday, claiming she was repeatedly harassed and threatened with death, then denied a discharge because her superiors wanted to send her to Afghanistan. Pte. Bethany Smith, who adopted the name Skyler James upon fleeing to Canada two years ago, took her case to Federal Court after being rejected as a refugee by the Immigration and Refugee Board.

Smith’s lawyer, Jamie Liew, said she knows of no lesbian or gay American soldier who has been granted refugee status in Canada or elsewhere based on sexual orientation.

Smith, 21, said she will face a court martial if she returns to the U.S. and fears her sentence will be stiffer than most because anti-gay sentiment persists in the military justice system.

Smith contends the army broke its policy of discharging openly gay members because it needed soldiers to deploy to Afghanistan, where she was to serve as a mechanic.

“I asked for a discharge and they said we’ll figure out the paperwork after I got back,” she said in an interview.

The U.S. military has a “don’t ask, don’t tell” rule that dictates that gays and lesbians must be discharged if they reveal their sexual orientation. U.S. President Barack Obama has said he will end the policy, implemented during former president Bill Clinton’s administration.

Smith, who says she was outed by a soldier who spotted her walking hand-in-hand with a woman at a shopping mall, contends in court documents that she was badgered daily, saddled with extra work by her superiors and received more than 100 threatening notes on her dormitory door, including a death threat.

Smith served at Fort Campbell, in Kentucky, the same base where a gay soldier was beaten to death with a baseball bat in 1999.

Federal lawyer Brian Harvey urged the court to reject Smith’s claim, saying that it is not the job of the Canadian courts to interfere with U.S. military justice and its treatment of deserters.

“There’s no evidence that she faces tougher sentencing treatment because of her sexual orientation,” said Harvey, who added that Smith joined the army voluntarily.

Refugee status, Harvey said, should not be granted simply because Smith faces prosecution in her home country. Furthermore, Harvey questioned why Smith, in seeking a discharge, never told her supervisor about the badgering and the threats she says she endured.

The Federal Court of Appeal, in a ruling two years ago dealing with two other American military deserters, noted that the vast majority are punished with less-than-honourable discharges.

Smith, who works at an Ottawa call centre, describes herself as a war resister because she fled the army instead of going to Afghanistan with her unit.

However, her resistance is twofold.

“I was scared more of people who were supposed to be watching my back than the insurgents,” she said.

After serving one year in the army, she arrived in Cornwall in October 2007 and contacted the War Resisters Support Campaign. 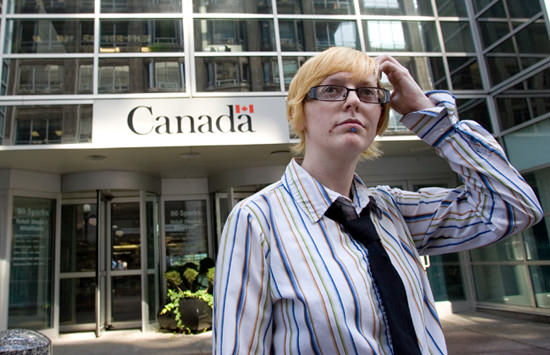