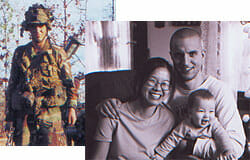 The first U.S. war resister to apply for refuge in Canada has been ordered deported by September 23rd. Jeremy is in Canada with his wife Nga Nuyen, and their two young children. This decision flies in the face of the motion adopted by Parliament on June 3, 2008 which calls on the government to allow US war resisters to apply for Permanent Resident status in Canada. Supporters are calling on Hon. Diane Finley, Minister of Citizenship and Immigration, to intervene. Phone 613.996.4974 or email finley.d@parl.gc.ca

Dale Landry, spokesperson for the Toronto-based War Resisters Support Campaign and himself a deserter of the U.S. Air Force, said action is being planned nationwide to try to sway the federal Conservative government from deporting Hinzman next month.

“We’re going to try everything we can do legally to keep him in the country,” he said. “If Jeremy is sent back, his wife is left as a single mom raising two small children and that’s not an easy thing to do while he’s in jail for God knows how long.”

Landry acknowledged Hinzman’s deportation order has sent shock waves through the hearts of other American war resisters residing in Toronto – many of whom chose to come to Canada after reading about Hinzman’s situation on various websites.

“It definitely is a cage-rattler,” Landry said. “Jeremy has lived here for the last four years. This is his home now.”

“There’s a lot of support (for the war resisters) in the Parkdale area,” she said. “We need to keep the pressure on to get an indefinite postponement (of all deportation orders against U.S. military personnel) so Jeremy and his family can stay.”