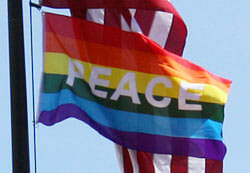 In Berkeley, California, join us on International Conscientious Objectors’ Day, Wednesday, May 15th, to celebrate the 7th Annual Berkeley C.O. and War Resisters’ Day. Peace Flag raising ceremony at 11:30am at the Civic Center flagpole at 2180 Milvia Street, Berkeley.

Berkeley, CA, May 14th, 2013—On Wednesday, May 15th, Berkeley CO and War Resisters’ Day, at 11:30 A.M., peace flags will once again be raised on two City of Berkeley flag poles as Berkeley celebrates the day proclaimed and designated in a 2007 Berkeley City Council resolution “…as the day on which Berkeley acknowledges, honors, and celebrates conscientious objectors and war resisters, civilian and military, past, present, and future.” May 15th is also International Conscientious Objectors’ Day. The City publicly recognized “that conscientious objectors and war resisters, past and present, civilian and military, have, due to conscience and principle, often sacrificed their time and freedom in prison or in exile or underground; and…conscientious objectors and war resisters often worked to end war and have refused for moral, ethical, political or religious reasons to participate in war; and…their resistance to militarism sets a noble example and an outstanding model for our youth and our whole community; and… their strength and their courage in following their consciences is often unsung.”

There will be brief remarks by representatives of the Berkeley Peace and Justice Commission, War Resisters League, Courage to Resist, the Bradley Manning Support Network, and Councilmember Kriss Worthington. There will be singing and an opportunity for COs and War Resisters of any era to speak. The event has drawn COs from World War ll to the present in past years.

Currently, COs around the world are imprisoned, some on a repeated basis, when they are released and repeatedly refuse to participate in military service. In the United States, U.S. Army PFC. Kimberly Rivera, a pregnant mother of four, was sentenced on April 29th, during a court-martial hearing at Fort Carson, Colorado, to 14 months in military prison and a dishonorable discharge after publicly expressing her conscientious objection to the Iraq War while in Canada. Under the terms of a pre-trial agreement, she will serve 10 months of that sentence. The Army has issued the harshest sentences to COs and war resisters who have publicly expressed their feelings about the wars in Iraq and Afghanistan.

This year is poignant, also, due to the long anticipated June 3rd starting date of PFC. Bradley Manning’s Court Martial trial at Fort Meade, Maryland after over three years of confinement, much of it under torturous conditions, for executing heroic acts of conscience when confronted with U.S. war crimes and the knowledge that his command was complicit with them and that only he could shed light on them.

In recent years, there has been a need, felt globally, to have the right of selective conscientious objection recognized by nations. The U.S. wars of aggression, of the last decade, have caused many U.S. soldiers to wake to the fact that even if they would defend their country militarily, they refuse to fight what they see as illegal and immoral U.S. wars.