Don’t believe the hype about Venezuela 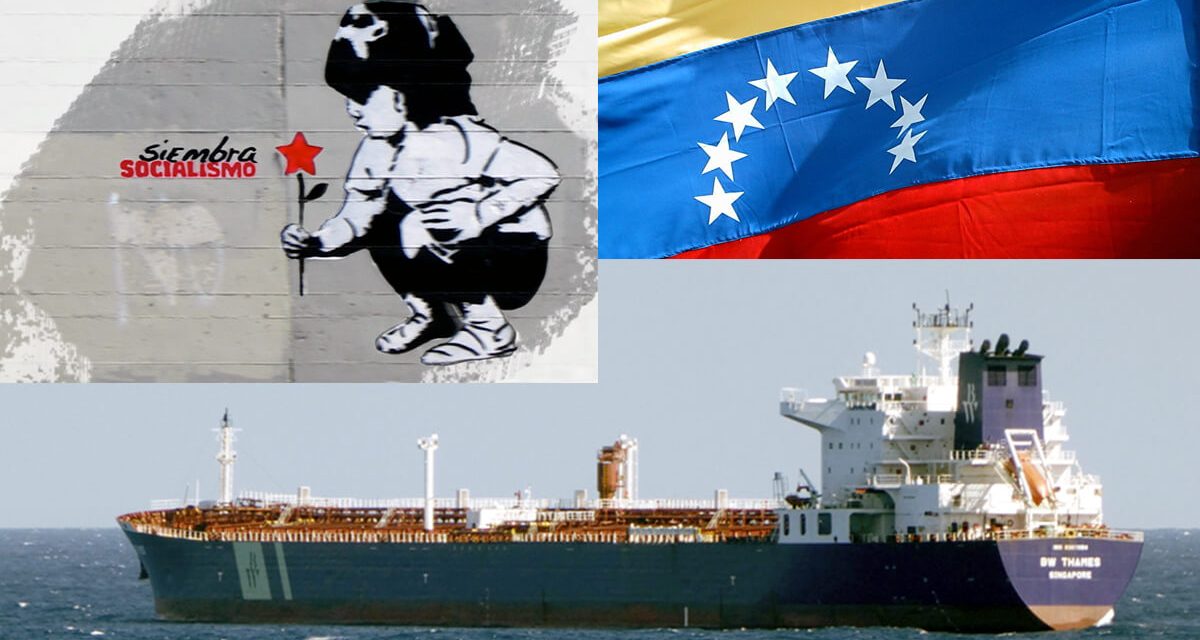 Randy was recently featured in a Courage to Resist podcast. Randy faced death for protesting the US war in Vietnam while in uniform.

Don’t blame Venezuela for the US economic war being waged against it. I took this photo (above) on February 9, 2019, less than 100 miles off the coast of Venezuela. Pictured is one of a dozen or so stranded oil tankers that were caught up in the sudden US embargo of Venezuelan oil. Notice there is no smoke coming from its stacks, and no wake. The ship is dead in the water, drifting aimlessly.

Last January 28th, the US—without warning—announced an embargo of Venezuelan oil. Suddenly, ships like this one, already loaded and bound for a buyer, couldn’t off-load the oil they carried. Port fees are steep, so the best this tanker can do is drift at sea until a new buyer can be found for its load. I have no idea if the crew continues to be paid, or if they are being held captive, adrift in political doldrums of US making.

Like the sailors on this ship, the Maduro government and Venezuelan people are victims of an economic war not of their making. Oil provides 90% of Venezuela’s income. In recent years, the US has been doing everything possible to starve the Bolivarian Revolution into submission, while blaming the victim for being hungry. This recent oil embargo is a major escalation of that attack, a choke hold around Venezuela’s throat.

Don’t be fooled. We are witnessing a US siege, much like the days of yore, when an invading army would surround a city and starve it out. This is NOT the fault of the Maduro government or the Bolivarian Revolution. It is rapacious capitalism at its swinest. Just like when the US invaded Iraq because it wanted to be the seller—not the buyer—of Iraqi oil, this economic war against Venezuela is nothing but a grab for the largest proven oil reserves on earth.

Don’t blame Venezuela any more than you blame the sailors on this drifting ship for the suffering being inflicted on them. Far too many people assume that the government there must be doing something wrong, because corporate news keeps saying so. I don’t think that’s true. This is what it looks like when a social democracy is under US attack. Please talk to your friends and neighbors about what’s going on in Venezuela, and show up in the streets.

Why do I bother to say this?

Back in 2010 my wife, Kay, and I went to Venezuela to see for ourselves how things were. We weren’t hosted by the Venezuelan government. We weren’t important enough to merit government attention, and didn’t try to get it. We weren’t there on a movement tour, or connected to anybody. We were tourists with a journalistic interest. We interviewed taxi drivers and right-wing anti-Chavista student activists. We had lengthy conversations with our landlord, well informed in Venezuelan affairs, if from a mildly anti-Chavez perspective. We talked to anybody who would talk to us. And we went to a pro-Chavez community television station to formally interview the staff there about their own story, and how it fit in with the national one. Admittedly, that was some years ago, but what we found then gives me perspective on what’s happening now.

The story of the “Bolivarian Revolution,” detailed to us by random Venezuelans, begins with the “Caracazo,” the February, 1989 uprising mainly in Caracas, the capital of Venezuela. It was a truly massive upheaval of the Venezuelan people, the largest in Venezuelan history until that time, an outpouring of the people against neoliberal pro-market reforms imposed by the World Bank and then-President Pérez.

Hugo Chavez was an officer in the Venezuelan military back then, when the government declared martial law and ordered the troops to crush the rebellion. Wikipedia says 3,000 citizens were killed in the effort. Chavez recalled in an interview with American peace activist Cindy Sheehan (and in other places as well) that the military followed their orders to reestablish “order,” violently crushing the people in the streets. While the movement struggled to regroup, activists in the military plotted to make sure a massacre of their own people like that would never happen again. Within a few years, there were two failed coups. Chavez was an organizer of one of them and he went to prison for sedition, but not before he gave a speech, in full uniform, detailing themotives of the revolt, which propelled him into the national spotlight. Meanwhile the next wave of the movement was building and President Pérez was impeached and removed from office. A “caretaker” grandfather-type president named Caldera made the mistake of letting Chavez out of prison to run for president in the next election. I think it’s fair to say that Hugo Chavez was the Nelson Mandela of Venezuela. Chavez, the rebellious soldier who stood against the brutality that had happened in 1989, won handily in 1998, only 9 years after the massacres associated with the Caracazo uprising. He never lost an election after that. I’m pretty sure the people believed in his oath of “Never Again.” His election was the first in a wave of Latin American leftist political victories.

That may not be the American government or corporate media’s line, but that IS the story Kay and I gathered in Venezuela a few years back. Chavez was a GI resister who actually delivered on the promise so many soldiers have made, often silently to themselves; “Never Again.” Any American veteran who ever made that same promise should take pride in a brother soldier who stood up when it counted, and made damn sure it really was “never again.” He—and the movement—had to figure out how to run a country in the process. They did OK. Made some mistakes—who wouldn’t—but so far they’ve kept true to their cause. And it is this origin story that makes me suspicious of any report that the Maduro government today is overly brutal against its own people. President Maduro is continuing the Bolivarian Revolution that began because of a determination to NOT vamp on their own people.

In Caracas, Kay and I talked to right wing students from upper class families, the anti-government, anti-Chavista forces, proud of the tear gas they had tasted while battling for their counter-revolutionary cause in the streets. Much of their complaint in those days was about how the administration handled their protests. But the more they talked, the clearer it became that it was only after they began breaking windows and throwing fire bombs that the police responded with tear gas and rubber bullets, which, frankly, any government would do. As an American police detective later shrugged when I told him of our discussions, “All they can complain about is tear gas and a few rubber bullets? That ain’t a dictator, we do that here.” In addition, the anti-Chavez movement was proud of how many people had signed their petitions. I think that if anti-government forces feel safe enough to sign their name on an open petition, they aren’t living under an oppressive dictatorship.

Besides the tear gas complaints, the Venezuelan opposition’s big beef, when we were there, was that the country was experiencing rolling electrical brown-outs. Seems that instead of installing oil-generated electrical plants, the Chavez government had invested in non-polluting hydroelectric power. A severe drought had lowered water levels behind the dams so badly that there was a shortage of electricity. It is not the Venezuelan government’s fault that they, like many places, were experiencing climate change-induced oddball weather events. When we were there, the Venezuelan right wing was essentially blaming Chavez for the lack of rain.

Teargas and drought don’t seem like very harsh charges against the current Venezuelan government. Particularly when you consider the horror the previous government had been willing to inflict on those who disagreed with it, the horror that motivated Chavez in the first place, the horror he had sworn would never happen again.

History is full of the stories of heroes who chose duty to humanity over duty to uniform. Some pay dearly for their resistance and meet their fate as bravely as they can. Chelsea Manning comes to mind immediately. Sometimes an act of resistance changes the course of history in direct and definable ways. Rosa Parks comes to mind in this regard. Hugo Chavez, too, was one of those resisters and his legacy, I think, should be written from that perspective. When Chavez died, and Maduro took over as President, the sincerity of the revolution in Venezuela didn’t change, nor did the lies perpetrated against it. One thing that DID change over the years is the invention of fracking, which has increased world oil supplies and sharply reduced oil prices. That has made it increasingly difficult for the government to fund the revolution’s social programs, which had greatly improved the life of average Venezuelans. That fracking was developed shouldn’t be held against the Bolivarian Revolution. It is not a failure of socialism that world oil prices dropped due to technical innovation.

Nowadays, after years of US embargo and strangle-hold, with the Venezuelan economy in shambles due to the overt manipulation of US capital and its cronies, the government there is being blamed for the hunger of its people. And when the opposition misbehaves, it yells “brutality” at a government that has, from everything I can tell, acted honorably and with amazing restraint. I’m no expert on Venezuela, just one of your neighbors who happens to have gone there to see things with my own eyes. If you ever chanted “No blood for oil” before, you might want to pay attention, because I think the US is up to its old tricks again.