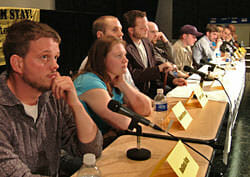 Ruling Conservative government may try to ignore will of people

Yesterday the Canadian Parliament made an historic vote in favor of U.S. war resisters seeking refuge from fighting in the unjust and illegal occupation of Iraq. While this is an amazing victory, the motion is non-binding. The minority Conservative government led by Stephen Harper—a close ally of the Bush-Cheney endless war agenda—has indicated that it is prepared to defy the resolution by proceeding with deportations of war resisters. Creative resistance will likely be required on both sides of the border.

We need to act now to make sure that the will of many people living in the U.S., the Canadian people, and now Parliament can not be ignored. Please contact Ministers Harper and Finley to request that they fully implement the resolution in support of U.S. Iraq War objectors and allow them to stay in Canada.

[It is recommended that] the government immediately implement a program to allow conscientious objectors and their immediate family members (partners and dependents), who have refused or left military service related to a war not sanctioned by the United Nations and do not have a criminal record, to apply for permanent resident status and remain in Canada; and that the government should immediately cease any removal or deportation actions that may have already commenced against such individuals.

With Courage to Resist organizers in attendance in Ottawa, this resolution first passed out of the Standing Committee on Citizenship and Immigration by a vote of 7-4 December 2007. That set the stage for yesterday’s 137-110 vote in the full House of Commons. All of the Canadian opposition parties—the Liberal Party, the New Democratic Party, the Bloc Quebecois, and the Green Party—rallied behind the motion, with only the ruling Conservative Party voting against.

Up until last week, war resisters and their supporters remained skeptical of the chances for this win. However, the pan-Canadian organizing of the War Resisters Support Campaign, and our ongoing efforts here in the U.S., came to fruition.

Since last November, Courage to Resist has sent approximately 7,500 “Dear Canada: Let U.S. War Resisters Stay!” letters to Canadian officials on behalf of individuals across the United States. On January 25, Courage to Resist led vigils and delegations to eight Canadian consulates across the U.S. with the help of Iraq Veterans Against the War, Veterans for Peace, United for Peace and Justice and CodePink, resulting in actions in Washington DC, New York City, San Francisco, Seattle, Los Angeles, Dallas, Philadelphia, and Minneapolis. 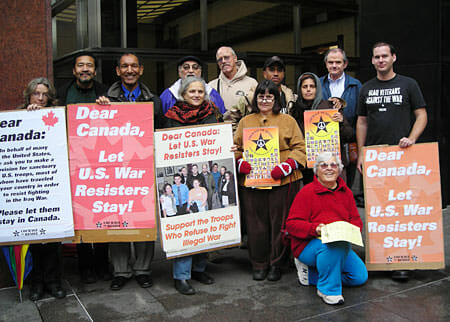 Corey Glass, a former sergeant in the California National Guard, travelled to Canada in 2006 to resist redeployment to Iraq. He was recently told to leave Canada by June 12 or face removal to the United States. He was the first of an estimated 200 U.S. war resisters currently living in Canada to receive a deportation order.

With all legal avenues of appeal closed last November by the Canadian Supreme Court, Corey welcomed the possibility of this political resolution. “I’m thankful that the MPs voted to let me and the other war resisters stay in Canada. I’m also thankful to all the Canadians who urged their MPs to support us.”

Like other war resisters in Canada, Corey earlier explained, “What I saw in Iraq convinced me that the war is illegal and immoral. I could not in good conscience continue to take part in it.” On May 21, Canada’s Immigration and Refugee Board denied him refugee status, ruling that he did not face a “well-founded fear of persecution” such as torture or death if he returned to the United States. He was ordered to return to the United States by June 12 or be deported. The passage of this resolution now throws that order into question.

Struggle far from over 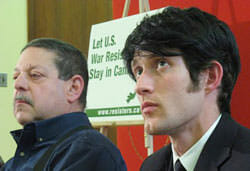 “This is a great victory for the courageous men and women who have come to Canada because they refuse to take part in the illegal, immoral Iraq War, and for the many organizations and individuals who have supported this campaign over the past four years,” said Lee Zaslofsky, Coordinator of the War Resisters Support Campaign and a Vietnam War deserter who came to Canada in 1970.

Gerry Condon, of Project Safe Haven, is organizing a celebration outside of the Canadian Consulate in Seattle (1501 4th Avenue) Thursday, June 5th at noon.

Gerry, however, adds, “The struggle for sanctuary in Canada is far from over. The Conservative government, a staunch ally of the Bush administration, may choose to defy the will of the Canadian people by ignoring this advisory motion… Our victory is that we now have the Canadian people and Parliament clearly on our side, not that the government is ready to grant sanctuary to war resisters.”

Nearly two of three Canadians are in favor of U.S. war resisters being allowed to stay according to a recent poll, and of course many Canadians have opened their homes and their hearts to our war resisters.

In collaboration with the War Resisters Support Campaign, Courage to Resist is asking that the Conservative government respect the democratic decision of the Canadian Parliament and immediately implement the motion and cease deportation proceedings against Corey Glass and other war resisters.

We will be updating our “Dear Canada: Let U.S. War Resisters Stay!” letter writing campaign in the coming days to reflect this new phase of our ongoing efforts to support our U.S. war resisters in Canada. Visits and vigils to Canadian Consulates across the United States are again being planned.