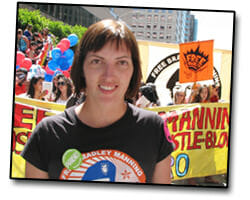 Donate to Courage to Resist. Help us support Bradley, and all GI resisters!

A few days ago we finally got word that PFC Bradley Manning’s first day in court will be Friday, December 16th at Fort Meade in the Washington DC area. Our campaign team has spent months preparing for this announcement. On Saturday, December 17th–Bradley’s 24th birthday–we’re gathering hundreds of friends at the Fort Meade Main Gate to rally for Bradley and speak out against his injust imprisonment. We’ve been working on event announcements, press calls, and recruiting speakers. U.S. Army Col. Ann Wright (ret.), Pentagon Papers whistle-blower Daniel Ellsberg, and LGBT veteran Lt. Dan Choi will be joining us, along with Iraq War veterans, representatives from local labor and teachers unions, Occupy Movement activists, and supporters like you. It is deeply inspiring to watch so many different Americans coming together to send a strong message to our political and military leaders. December 17th is a day of solidarity with Bradley with dozens of events planned internationally for those that can’t make it to Fort Meade. If Bradley released this information about government corruption and military war crimes, he is a whistle-blower who deserves to be freed.

Prior to beginning at Courage to Resist in February, I worked for a number of other non-profit causes, including the Sierra Club, Rainforest Action Network, and Global Exchange. All these efforts involved organizing supporters at the grassroots to create a more just and peaceful future. I feel that saving Bradley now is as important as anything I’ve ever done. A few things that struck a chord with me when I first learned about Bradley:

Bradley was, like me, in high school during the beginning of the “global war on terror”. My generation grew up during a time of relative calm, with schools telling us that America’s role in the world was one of a peaceful leader that fostered international equality and understanding. Of course, as my generation watched news unfold about the terrorist attack on September 11th, 2001, and the response by the Bush Administration, we knew our world was swiftly changing. We struggled to make sense of it. Like one of my best friends, Bradley joined the military.  According to a friend of Bradley’s, he did so in hopes that he could help spread democracy and save both Iraqi and American lives.  However, at some point in his service his viewpoint changed.  In the chat logs attributed to him he asks: 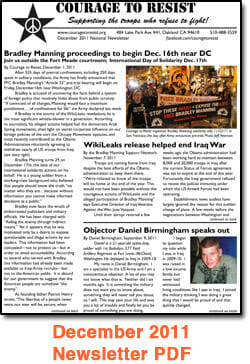 If you had free reign over classified networks for long periods of time… and you saw incredible things, awful things…things that belonged in the public domain, and not on some server stored in a dark room in Washington DC…what would you do?

Many young people, like Bradley, value the lives of people around the world just as much as those they are familiar with. This world citizen perspective is inconvenient for the military and the established elites, but its crucial for the long-term survival of our nation and humanity.

The information Bradley allegedly released touches on the lives of people around the world, and helps to bring to light the roots of many problems. Most Americans have opposed the war and occupation of Iraq for years. Yet, American reporters have shied away from the details of the conflict. The documents Bradley allegedly released gave us a more accurate casualty count, information about war crimes, and the continued use of torture in Iraq. It gave us proof that many innocent people lost years of their lives in the Guantanamo Bay prison, and that the Obama Administration worked to prevent Bush Administration officials from being prosecuted for breaking international human rights laws. It also taught us how our tax money goes to advocate for corporate interests and the exploitation of working people abroad–such as State Department efforts to keep the Haitian minimum wage from being raised. One of the top impacts of WikiLeaks has been to teach regular Americans about American foreign policy. In a democracy, the public has a right and a need to know about its government.

Given the significance of the material Bradley is accused of releasing, another thing that led me to recognize the importance of this campaign is that a year ago I had not heard of “Bradley Manning.”

Today, when I go to events and talk to strangers about Bradley, they are often similarly shocked they have not heard his name. No doubt, this is what many officials in the State Department and military want. When domestic reporters fail to cover controversial foreign policy topics, military leaders can carry on with their agenda unquestioned.

Courage to Resist has played a crucial role in educating millions of people about Bradley’s case, both through direct outreach and working with both mainstream and alternative media. Over 700,000 people have signed petitions in support of Bradley. And in October, Bradley was a serious contender for the Nobel Peace Prize. These successes demonstrate how the tide is starting to turn. 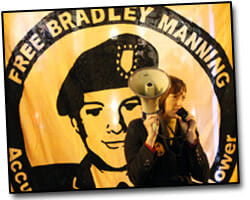 At our core, Courage to Resist is a small team of dedicated individuals that bring special skills, experience, and passion to supporting people such as Bradley who possess courage and conscience. Veterans, activists, and media experts alike, we are dedicated to doing the best job we can to defend truth, our democracy, and those soldiers who are brave enough to speak out against injustices.  However, we cannot do this work without your help.

Donate to Courage to Resist. Help us support Bradley, and all GI resisters!

P.S. Please consider becoming a monthly sustainer through the end of Bradley’s court martial next summer. This will give us the financial stability to mount a more aggressive public defense of Bradley. Also, if you’d like part or all of your donation to go towards the Bradley Manning Defense Fund, just note that on your check (484 Lake Park Ave #41, Oakland CA 94610). We administer the defense fund on behalf of the Bradley Manning Support Network. Otherwise, we’ll use your contribution to support Bradley, along with other GI resisters.