Petition to free Daniel Hale; Pled to one charge of drone whistleblowing 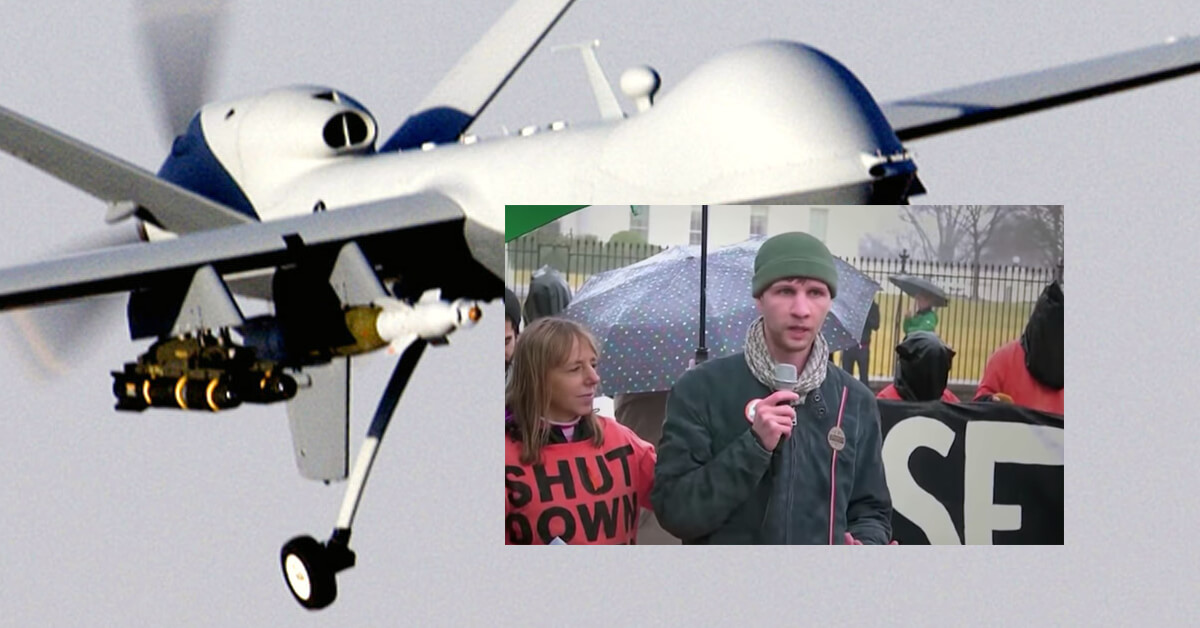 By CODEPINK: Women for Peace 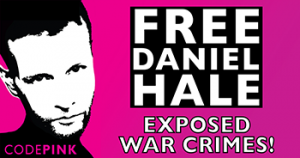 In response to the guilty plea that Daniel Hale entered on March 31, 2021, in the government case against him for whistleblowing, CODEPINK wants to express our total solidarity with Daniel Hale. Daniel deserves to be awarded for his courage in exposing the truth about extrajudicial assassinations by killer drones, not imprisoned.

No one in the U.S. government, including the military and the CIA, has ever been held accountable for the horrific crimes of killing civilians in drone strikes. But Daniel Hale is being severely punished for wanting to let the American public know what was being done in their name. He was accused of giving an investigative journalist truthful information about the secretive US drone warfare program, information that revealed gross human rights violations, including the fact that drones were more deadly and less accurate than the US presented publicly. In fact, this data showed that nearly 90% of those killed by drone strikes were not the intended target!

For exposing these egregious murders, Daniel was charged with four counts under the Espionage Act of 1917 and one count of theft of government property. Facing decades in prison, on March 31, 2021, Daniel pleaded guilty to one count of “retention and transmission of national defense information” in violation of the Espionage Act. This plea could result in years in prison, but will likely be a fraction of the decades in prison time that the government originally sought. But his ordeal may still be further complicated: While Daniel pled guilty to one of the five counts, the government has yet to dismiss the remaining four counts.

We at CODEPINK have known and admired Daniel even since he started speaking out against drone killings in 2013. In November 2013, Daniel Hale spoke at our CODEPINK Drone Summit. Knowing that speaking out could bring the wrath of the US military and judiciary against him, he was very nervous. But he was determined to do what no U.S. politicians have had the courage to do: apologize to the innocent victims of our military attacks.

“To the people in the audience who are victims or who are families of victims or have families who live in countries where U.S. militarism, specifically unmanned systems are conducting kinetic strikes, I’m sorry,” he said. “For a short period of time during my military career as an analyst, I worked with unmanned systems and deployed to Afghanistan. And at the very least, you all deserve an apology” Hale said.

In the government’s case against Daniel, they were not able to identify a single person harmed or killed by his actions. But the drone program that Daniel was accused of exposing led to the death and maiming of thousands of civilians, including many children, who were simply “in the wrong place at the wrong time.”

From Afghanistan and Pakistan to Somalia and Yemen, the U.S. military and CIA have used killer drones to bomb wedding parties, funerals, farmers working in their fields, or families simply sleeping in their beds at night.

Shamefully, U.S. courts have held that a whistleblower’s motive— revealing information in the public interest to expose government misconduct—is irrelevant in an Espionage Act trial. That’s why Congress must amend the draconian and antiquated Espionage Act, since it makes it impossible for whistleblowers like Daniel Hale to get a fair trial.

Daniel Hale will be up for sentencing on July 13 in front of Judge Liam O’Grady. We are calling on the judge to not sentence him to jail time. Please join us in petitioning the judge for leniency.

Daniel Hale, an Air Force veteran and former U.S. intelligence analyst turned anti-war activist was arrested May 9th and charged with violating the Espionage Act. Daniel is a well-known anti-drone activist who has spoken out a number of anti-war events and conferences. He is also featured in the award-winning documentary “National Bird.”

For years, Daniel has expressed concern that he would be targeted by the government for his activism. It appears that while the Obama Justice Department opted to not go after him, the Trump Administration is going back in time in order to wage their war on whistleblowers.

Daniel Hale, 31, was arrested in Nashville. He faces up to 50 years in prison. Hale is accused of disclosing 11 top secret or secret documents to a reporter. The indictment does not name the reporter but unnamed government sources have told media outlets that the reporter is investigative journalist Jeremy Scahill of The Intercept. In 2015, The Intercept published a special report called the Drone Papers exposing the inner workings of the U.S. military’s assassination program in Afghanistan, Yemen and Somalia.