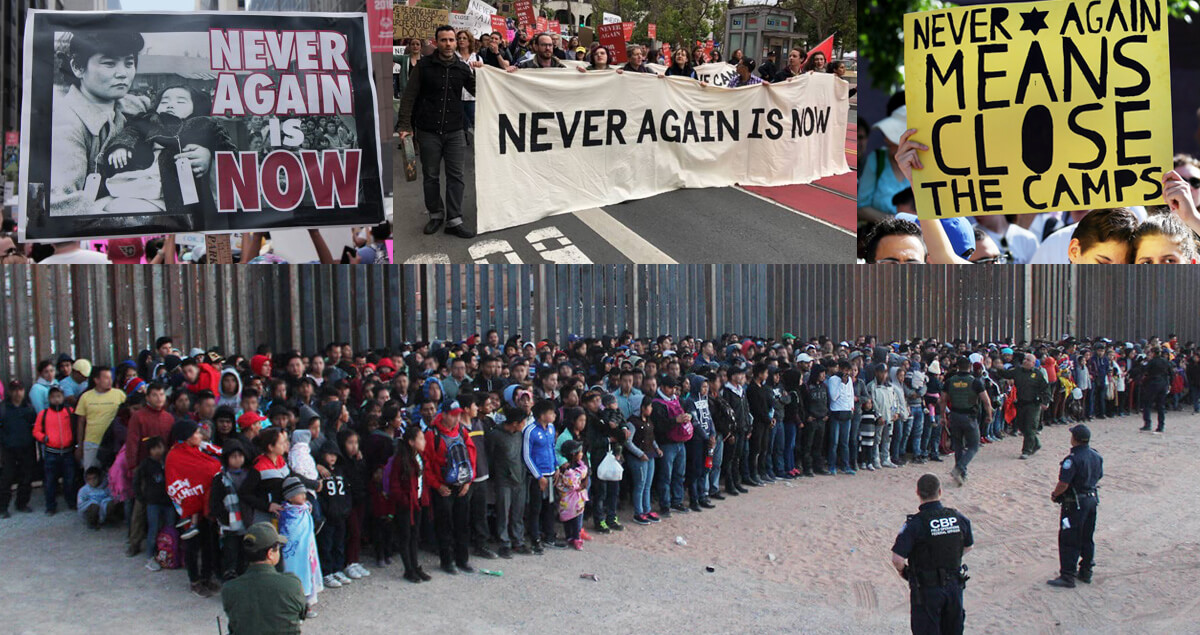 A call to action by Courage to Resist

The Trump Administration has unleashed ICE in unprecedented ways.

Hundreds swept up at a time, in search of “hispanics.”

Military forced to host and support new concentration camps, as well as deployments to the Southern border.

So far in 2019, border patrol agents have incarcerated around 600,000 more people. Children, the youngest four months old, are still being separated from their parents and held in cages which are being described as torture conditions.

Foreign-born children who are in the country with special immigrant status for medical conditions are now being forced to leave within 33 days. Trump continues to suggest ending birthright citizenship. And the city of Juarez, Mexico is now bringing a $60 million lawsuit against the U.S. government for failing to provide medical care to an infant child who died after ten days in ICE custody with her mother.

All of this is happening in the context of a wave of terrorist attacks carried out by White Nationalists who have explicitly taken direction and inspiration from Trump’s war on immigrants. Dayton, El Paso, …

In El Paso, musicians and activists show up at the facilities and sing to those imprisoned. Professionals and workers in many fields continue to organize, plan protests and lodge their resistance.

In Texas and Florida, significant political resistance resulted in the temporary emptying of child prison camps, Tornillo and Homestead, releasing children to families, sponsors, or sent to other detention facilities.

In Nashville, one neighborhood formed a human chain around their neighbors’ van to protect them from ICE. Rapid-response methods and community-defense patrols are now being developed and popping up around the country. Groups of people walk, drive, bike around vulnerable neighborhoods keeping an eye out for ICE agents as well as set up hotlines to report ICE activity. Others have been successfully jamming up ICE’s hotlines making them unusable by the agency.

In Mississippi the lawyer who for years worked against the infamous racist Arizona Sheriff Arpaio and his workplace raids, has joined forces to support the processing plant workers recently rounded up by ICE. One woman Maldonado is representing was separated from her breastfeeding child even though ICE denies it.

In response to the Mississippi ICE raid, dozens of clergy members in Alabama vowed to make their churches places of sanctuary for immigrants. Some of these churches have never been active but now are training themselves and preparing for direct action. Churches around the country are responding similarly.

In Oklahoma, mass protests are resisting the revivement of Fort Sill, once an internment camp for Japanese-Americans, to now detain undocumented immigrant children.

In Minnesota and Los Angeles, “Never Again Is Now” activists successfully blocked entrance to ICE’s main facility and protested inside of private prison funders’ offices. Jewish groups across the country continue to organize, march and form “Close the Camps” protests.

New whistleblowers have also joined the ranks of courageous truth tellers. In May Homeland Security policy advisor, Ellen Gallagher, told her story about calling out ICE’s excessive and extreme use of solitary confinement which should only be used as a last resort. And former ICE spokesman, James Schwab, came out publicly about resigning due to orders to lie about the impact on ICE’s raids by Oakland’s mayor preemptively alerting the community.

How did we get here?

In July 2018, Courage to Resist alerted people to what might have been the defining low point of previous administrations, but simply the outrage of the moment today: A plan for the military to host massive concentration camps of upward of 200,000 immigrant detainees across the United States. You helped us distribute thousands of leaflets as well as military-oriented social media ads for our public challenge, “To the troops: Do not collaborate with the illegal immigrant detention camps.”

Unexpectedly, the Trump Administration then shifted the military’s primary role in this horror story to direct deployments to the Southern Border. This was based on a “cabinet order” that stood in direct violation of the federal law–the 1878 Posse Comitatus Act–assumed to safeguard against martial law.

Today, the military’s role in the “war on immigrants” continues to expand, while US military veterans who enlisted based on promises of citizenship, are being deported in record numbers.

Addressing his motivation for whistleblowing on ICE, James Schwab stated “One of the most important reasons that I’m doing this is that – so that people hear that someone else stood up, that someone else said, ‘No.’ And was concerned with it . . . And no special agent from the Department of Homeland Security is gonna stop me from saying that.”

“They are experiencing trauma that will stay with them for a long time, and from which they may never fully recover.”  – Colleen Kraft, immediate past president of the American Academy of Pediatrics

Speaking about the recent teeter-totter built into the Mexico/U.S. border so that children on both sides can play with each other, designer Rael had this to say. “The wall became a literal fulcrum for U.S-Mexico relations and children and adults were connected in meaningful ways on both sides with the recognition that the actions that take place on one side have a direct consequence on the other side.”

In response to DHS Office of Inspector General’s July report the DHS stated “The current migration flow and the resulting humanitarian crisis are rapidly overwhelming the ability of the Federal Government to respond.”

We have the ability to interrupt and direct the direction of this humanitarian crisis if we act now.

SF Rally, protest, and march – Grito to Close the Camps!

Monday, September 16, from 11AM-2PM @ 24th Street and Mission, San Francisco CA
Sept. 16 is Mexico’s celebrated Independence Day (from Spain in 1810). The “GRITO” means SHOUT or CRY OUT in Spanish and is the loud yell of independence (from the Spaniards) that is shouted out every year on Sept. 16 throughout Mexico including many US cities with substantial Mexican population including San Francisco. The event begins with a rally at 11AM at 24th and Mission followed by a 12 noon march from there to City Hall and a 1PM rally there. 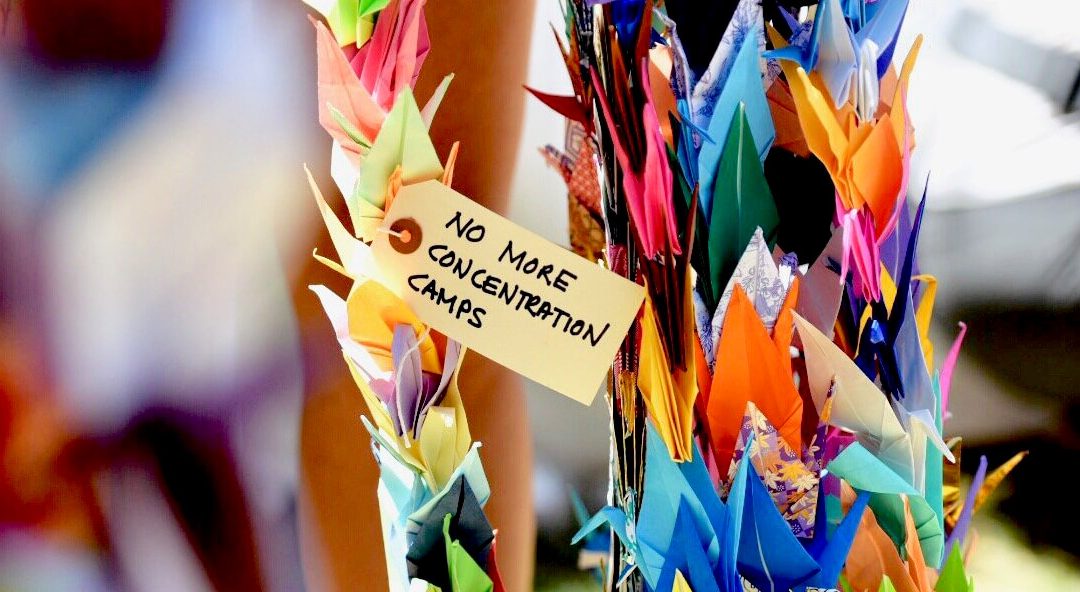 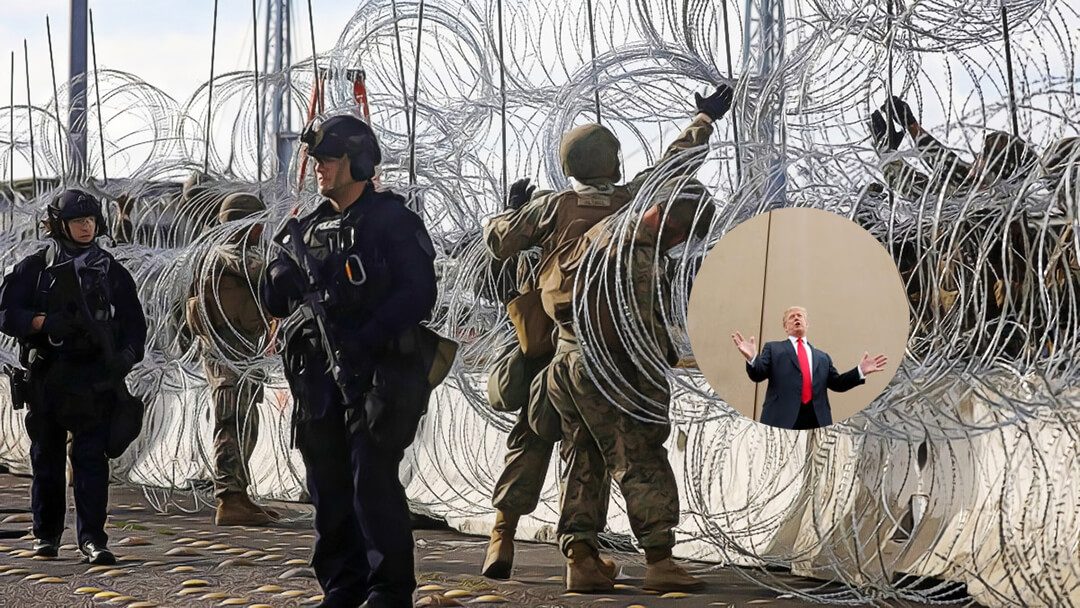 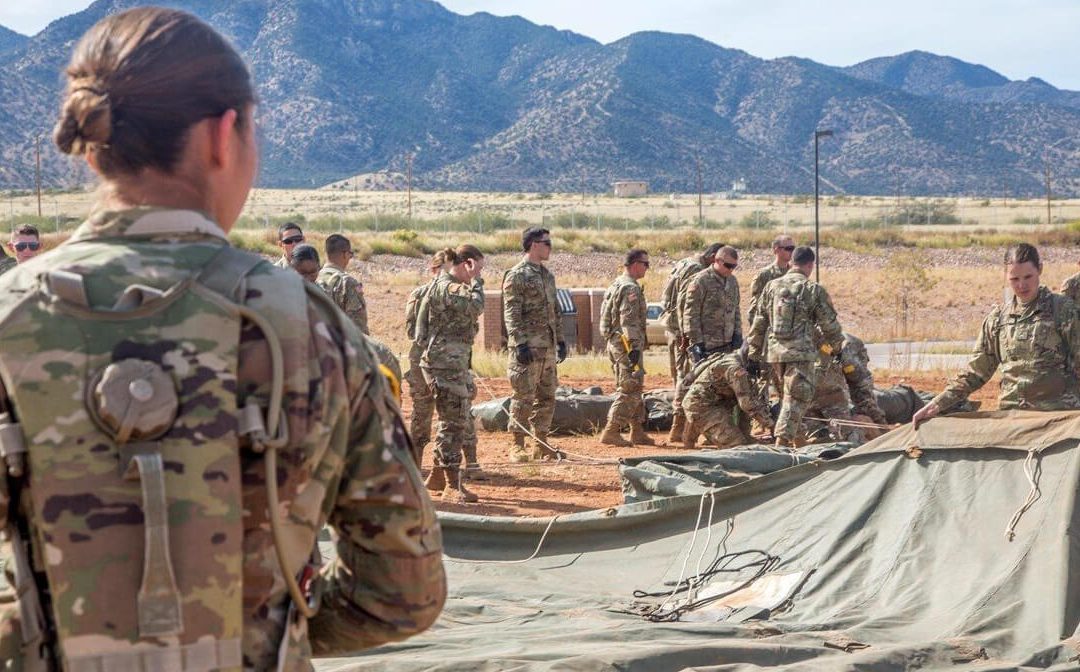 Critical legal info for US service members concerned about legality of orders to deploy to the US-Mexico border. 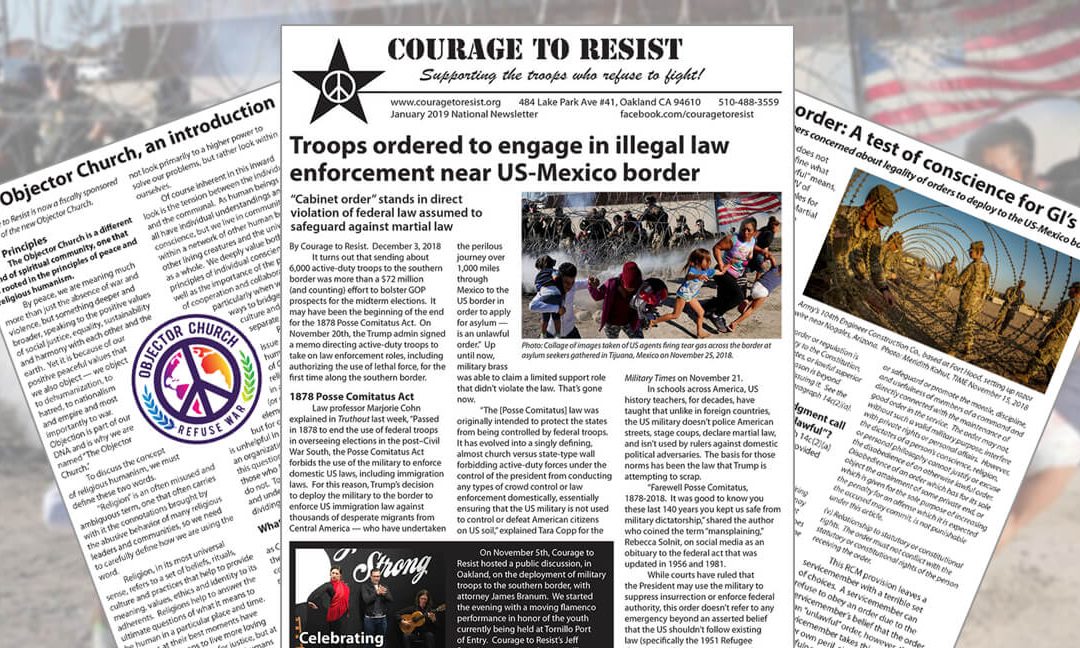 PDF updates: Illegal orders at the border, Resistance through dance, Deployed to the border: A test of conscience, The Objector Church.