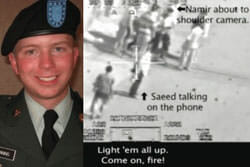 “From what I’ve heard of (Pfc. Bradley) Manning, he is a new hero of mine.” —Daniel Ellsberg, Pentagon Papers whistle-blower

In April, the Wikileaks website released a video depicting a US helicopter attack in Baghdad that killed eleven unarmed Iraqi civilians, including two Reuters employees, and seriously wounded two children. Titled “Collateral Murder”, the video was widely posted and reported on.

Last week, the Army charged 22-year-old intelligence analyst Pfc. Bradley Manning with providing the video after he allegedly took credit for doing so online. For the past month, he has been held in isolation from supporters and civilian legal assistance in a US military confinement facility in Kuwait.

The Potomac, Maryland native was charged with two counts of the Uniform Code of Military Justice (UCMJ). The first encompasses eight alleged criminal offenses, and a second covers four noncriminal violations of Army regulations governing the handling of classified information and computers. According to the Army, the “classified video of a military operation in Iraq was transmitted to a third party, in violation of a section of the Espionage Act, 18 USC 793(e),” which involves passing classified information to an uncleared party, but not a foreign government. He allegedly also provided Wikileaks with 50 classified diplomatic cables that are thought to contain embarrassing insights into the state of the US occupation of Iraq.

News articles initially reported that the Iceland-based Wikileaks website intended to provide Bradley Manning with a legal defense team. However, the Army has so far blocked all communications with the soldier. Meanwhile, Army spokesperson Lt. Col. Eric Bloom has gone on record to deny that the isolation even exists.

It is possible that the Army prosecutors, in collaboration with an appointed military JAG “defense” lawyer, are using this time to pressure Bradley into accepting a plea bargain that will send him to prison for many years—but less than the threatened 52 years.

Courage to Resist, along with members of Iraq Veterans Against the War (IVAW) and Veterans for Peace, is launching an effort to support Bradley Manning. We know other concerned organizations and individuals around the world who are also in the process of finding ways to support Bradley Manning, and we expect to collaborate when possible. These include advocates for whistle-blowers and supporters of the freedom of information.

A public letter of support, including initial signatures, will soon be available at couragetoresist.org. You’ll be able to add your name, and we’ll send the message by postal mail on your behalf to President Obama and the Department of the Army.

Since it is unknown if the unidentified Wikileaks lawyers plan any further efforts on Pfc. Manning’s behalf, it is possible that we may need to take responsibility for providing Bradley Manning with qualified civilian legal representation with military court martial experience who are willing to travel to Kuwait to do so. If so, the legal expenses would also include the need for expert witnesses. We may need to recruit a lawyer to travel to Kuwait to simply speak with Bradley to inform him of the support available to him. If it comes to that, Courage to Resist will ask supporters to donate funds earmarked for that purpose.

On July 11, in order to kick off this effort, nearly 100 participants at the 6th annual IVAW national convention in Austin, Texas—including retired Army Colonel Ann Wright—issued a call for Pfc. Bradley Manning to be allowed communication with civilian lawyers, and that he be released from confinement.

There is plenty of intrigue swirling around Bradley’s case, from Lady Gaga to the role of international hackers. However, in the middle of all that stands a young man who made a heroic choice to expose the crimes being committed in our names. We’ll do whatever possible to support him.

News reports about this case include:

More from Wired.com that, if true, underscores Bradley courage to expose the truth:

Manning had already been sifting through the classified networks for months when he discovered the Iraq video in late 2009, he said. The video, later released by Wikileaks under the title “Collateral Murder,” shows a 2007 Army helicopter attack on a group of men, some of whom were armed, that the soldiers believed were insurgents. The attack killed two Reuters employees and an unarmed Baghdad man who stumbled on the scene afterward and tried to rescue one of the wounded by pulling him into his van. The man’s two children were in the van and suffered serious injuries in the hail of gunfire…

“At first glance it was just a bunch of guys getting shot up by a helicopter,” Manning wrote of the video. “No big deal … about two dozen more where that came from, right? But something struck me as odd with the van thing, and also the fact it was being stored in a JAG officer’s directory. So I looked into it…”

“He would message me, Are people talking about it?… Are the media saying anything?” Tyler Watkins, a close civilian friend in Boston, said. “That was one of his major concerns, that once he had done this, was it really going to make a difference?… He didn’t want to do this just to cause a stir…. He wanted people held accountable and wanted to see this didn’t happen again.”