Daniel is a 21-year-old active-duty soldier with 1st Battalion, 377 Field Artillery Regiment at Fort Lewis, Washington. He deployed to Iraq in 2009-10, and is now speaking out against war.

My name is Daniel Birmingham. I am a specialist in the United States Army and I am a conscientious objector. A lot of you may not know what that is. Neither did I six months ago. It is something the military does not want you to know about, something they will never tell you about, so I will. This may save your life and save you a lot of trouble and finally let you be proud of something you are doing.

A conscientious objector as stated in AR 600-43 is a person with firm, fixed and sincere objection to participation in war in any form or the bearing of arms, because of religious training or beliefs. I began to question my role in the military while I was in Iraq in 2009-10. I was raised in a low income family, but never had witnessed living conditions like I saw in Iraq. I joined the military thinking I was doing a great thing that I would be proud of and that quickly changed.

We are told that we are helping people and fighting for our freedom. Instead innocent people are being killed, I have lost most of my freedom and we have done nothing but generated more hatred in the world. The people I have waved rifles at have never done anything to me or you. Some do choose to fight back, but you have to put yourself in their position. If another country invaded the United States of America, we would do the same. They beg for water, wash their bodies in water filled with chemicals and live in destroyed villages. They are far from a threat to the people of our country and need actual help, not war.

When I returned from Iraq I was not the same person I was when I first joined the military. I began to look at situations from a different perspective. All my motivation for being a soldier was gone and I knew I could not do it any longer. As I tried to find my way out I felt trapped as I contemplated going AWOL. I felt trapped just like a lot of others have before and still do.

Eventually I refused to work; I did not show up and when I was called I told my chain of command I was done working for the Army. I did agree to go and talk to my first sergeant later that day. I was very surprised that he listened and understood. However I was still not told about the option of being a conscientious objector. I then met with counselors and a psychiatrist, but still was not told. Then when I was explaining my beliefs to one of my NCOs from Iraq he asked why I had not applied to be a CO. After speaking to him and a chaplain I did my research on it and finally found what I had been looking for the entire time.

My beliefs are not based on religion; they are based on personal morals. I cannot kill a person who has a harder life than I do, who has never done anything to affect myself or my family. I cannot be morally happy with myself being a part of this organization. I had a conscience long before religion was ever introduced to me. I never had to read a Bible or Quran to know that killing another human being was wrong —especially in wars that we know the politicians are lying about, wars that the majority of the American people oppose. That is psychologically embedded into us from the beginning as we all have emotions. 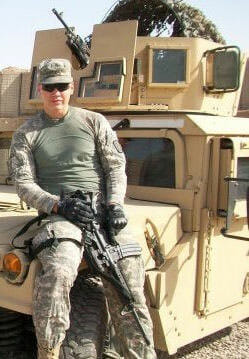 I worked on my CO paper for a little over a month before I was ready to submit my application. I was told not to tell people about what I was doing but I could not follow that order. I explained my situation to anyone who was willing to listen because one day soon they could have views like mine. I want to let as many people know that they do have power and do not have to fight in these unethical wars if they do not want to. I want these new soldiers to ask themselves if their life is worth $35,000 of deployment money. Ask themselves if they have any idea of why we are in these other countries because there is not a good answer to that question, nobody has one.

There are so many people who go AWOL, do drugs, or, even worse, choose to take their own lives because they cannot deal with that what they have seen or done and they know they cannot do it again. You do not have to resort to any of these drastic options, you just have to have the courage to stand up and say no. You can stand up for your beliefs and make a true impact, and that is your right. You still have a voice.