Could the draft program finally be coming to an end? 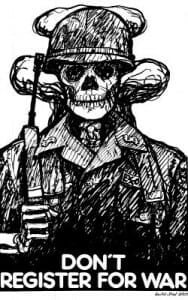 First, peculiarly enough, due to a lawsuit brought forward by a men’s rights group, the National Coalition of Men. NCM claims that that excluding women from the draft is unconstitutional. If the First District Court agrees, Edward argues that this could actually mean the abolishment of the entire draft.

Second, a bill with bi-partisan support has been introduced in Congress that, if passed, would, “end draft registration entirely, abolish the Selective Service System, and repeal the Federal ‘Solomon Amendments’ linking draft registration to Federal student aid, job training, and other programs.

Today the 9th Circuit Court of Appeals reversed the decision of the U.S.
District Court in Los Angeles that had dismissed the complaint in “National Coalition for Men v. Selective Service System”.

The Court of Appeals reinstated the complaint, and remanded the case to the U.S. District Court for consideration of the other issues in the case.

The next procedural step could be more written briefing on these issues, or a written scheduling order form the District Court, or an in-person or telephone “status conference” in Los Angeles, any of which could occur in a couple of weeks to a couple of months.

The most likely outcome of this and some other similar (although less far advanced) pending lawsuits is a court ruling that male-only draft registration in unconstitutional. Such a ruling would end draft registration, unless Congress changes the law…

The decision reinstating this case is likely to produce more pressure on Congress to take up the issue of draft registration sooner.  Both major parties are internally divided on draft registration: it’s a “wedge issue” already within each party as well as potentially between the parties.

Press release from the National Coalition for Men:
http://ncfm.org/2016/02/action/ncfm-wins-ninth-circuit-selective-service-appeal/

Petition in support of H.R. 4523:
http://diy.rootsaction.org/petitions/pass-the-new-bill-to-abolish-the-military-draft

FAQ about Health Care Workers and the Draft:
http://www.MedicalDraft.info