Cliff Cornell to be relased early

Iraq War resister Cliff Cornell was granted a 30 day reduction to his one year jail sentence this week. The Commanding General of Fort Stewart, Georgia knocked off the month in response to a clemency request filed by Cliff’s civilian attorney James Branum of Oklahoma. Cliff is now expected to be released on or about January 16, 2010.

Clemency appeals (known as “1105 requests” in military justice terminology) are rarely granted. However, Courage to Resist continued to fund Cliff’s post-conviction legal defense despite the odds. Our efforts, made possible by your donations, paid off for Cliff! We’re still about $500 short of being able to pay Cliff’s final legal bill. Although we have closed our separate fundraising page for Cliff, please donate at couragetoresist.org/donate

This is an important development as most define a felon as a person sentenced to one year or more imprisonment, so Cliff will no longer fit this definition. Hopefully this will make it easier for Cliff to find a job, and to eventually return to the community of Gabriola Island, Canada.

“On behalf of Cliff and those who care about him, I want to thank all of those who wrote letters on Cliff’s behalf. I truly believe this is what made the difference. We especially want to thank the 40 or so folks who wrote from Gabriola and surrounding areas of British Columbia. Also huge thanks are due to Courage to Resist, Quaker House, War Resisters Support Campaign, and Project Safe Haven for all of their work on this case,” declared James Branum. “I’ve talked to Cliff’s supporters at Quaker House in Fayetteville, NC (they have been visiting Cliff pretty religiously… pun intended… while he has been at the Camp Lejuene Brig) and they are planning a celebration upon his release.” 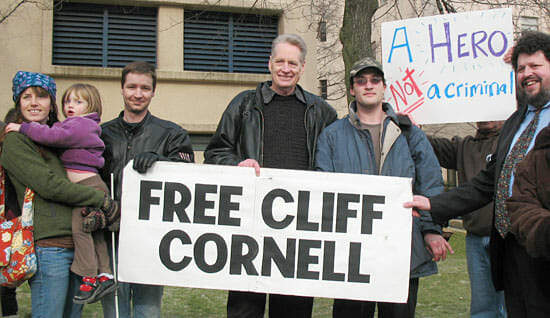 Cliff Cornell with supporters prior to returning to the Army for court martial.