Chelsea on her upcoming release from prison

Next week, Chelsea Manning will be released from U.S. military prison after serving a seven-year sentence for disclosing classified information that raised public awareness regarding the impact of war on innocent civilians.

Manning, a transgender woman, was serving an unprecedented 35-year sentence for whistleblowing and was forced to serve her sentence in an all-male prison. She received a commutation from President Obama in one of his final acts in office in January after an outpouring of support for Manning from the public over her mistreatment in prison.

The commutation followed a November 2016 request from Chelsea Manning’s appellate legal team, Nancy Hollander and Vincent Ward of Freedman Boyd Hollander Goldberg Urias & Ward, PA, to the U.S. Army, the Office of the Pardon Attorney, and the President’s Counsel, requesting the commutation of Ms. Manning’s 35 year court-martial sentence to time served and “a first chance to live a real, meaningful life.”

Coverage of Chelsea’s release from prison, and how a grassroots movement made it possible.

The ACLU filed friend-of-court briefs in support of the appeal of Manning’s conviction and represents Manning in a lawsuit against the Department of Defense that was first filed in 2014 over the department’s refusal to treat Manning’s well-documented gender dysphoria.

“For the first time, I can see a future for myself as Chelsea. I can imagine surviving and living as the person who I am and can finally be in the outside world. Freedom used to be something that I dreamed of but never allowed myself to fully imagine. Now, freedom is something that I will again experience with friends and loved ones after nearly seven years of bars and cement, of periods of solitary confinement, and of my health care and autonomy restricted, including through routinely forced haircuts. I am forever grateful to the people who kept me alive, President Obama, my legal team and countless supporters.

“I watched the world change from inside prison walls and through the letters that I have received from veterans, trans young people, parents, politicians and artists. My spirits were lifted in dark times, reading of their support, sharing in their triumphs, and helping them through challenges of their own. I hope to take the lessons that I have learned, the love that I have been given, and the hope that I have to work toward making life better for others.”

“Chelsea has already served the longest sentence of any whistleblower in the history of this country. It has been far too long, too severe, too draconian. President Obama’s act of commutation was the first time the military took care of this soldier who risked so much to disclose information that served the public interest. We are delighted that Chelsea can finally begin to enjoy the freedom she deserves. And we thank the many, many people and organizations who have supported her and continue to support her as we fight in her appeal to clear her name.”

“Like far too many people in prison, particularly transgender women, Chelsea Manning has had to survive unthinkable violence throughout the seven years of her incarceration. Finally, she will be leaving prison and building a life beyond the physical walls of the many sites of her detention. It is a remarkable gift to the world that Chelsea will be able to grow and fight alongside us for justice.

“The transition out of these horrific institutions will not be easy, and part of what we hope is that Chelsea will find the space, love, and support to heal and build a life of her choosing. Her fight to be herself, to access the medical care that she needed, and to gain her freedom have transformed law and society for the better. The urgency of those fights for so many in our communities will continue, and Chelsea’s past and future work will no doubt be a critical force in moving towards a more just society for everyone.” 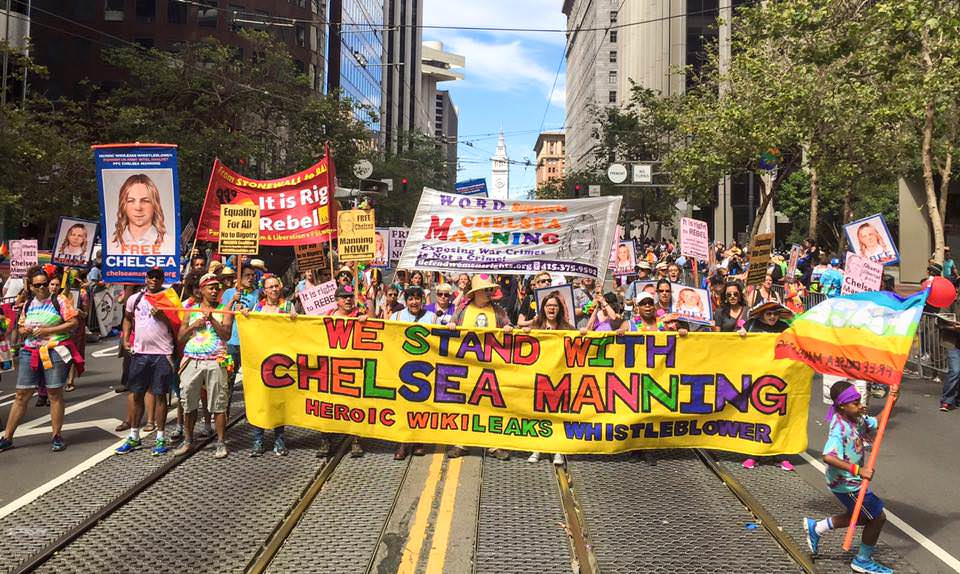