Changes underway for Courage to Resist 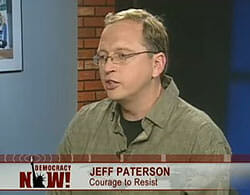 “Oh, never mind” update, April 7, 2017. After taking a year off, I’ve been back on staff part-time for a couple months now. Melissa Keith recently stepped down from her manager role (but continues to contribute as a collective member). We’re currently looking for someone to fill her shoes–if you know someone how might be interested, share our job description with them. In short, expect a new “changes underway” article soon! -Jeff Paterson, Courage to Resist Project Director

After ten years of helping lead Courage to Resist, in our mission of providing support to U.S. military war objectors, I’ll be stepping down as a staff member next month. While I’ll remain a member of the organizing collective, and retain a minimalist Project Director role for now, daily organizational responsibilities are being transferred to our current Office Manager, Melissa Keith, who will serve as Project Manager going forward. Melissa has years of experience with Courage to Resist, and I fully expect that she’ll be an amazing Project Manager.

I’ve been very lucky, this last decade, to wake up most days and be able to do the thing I most wanted to be doing. From ad hoc efforts in 2004 to support of the first U.S. Iraq War objectors, Stephen Funk, Kevin Benderman, and Camilo Mejia; to Courage to Resist’s “organizational debut” for Pablo Paredes in San Diego and Agustín Aguayo in Los Angeles; to our collaboration with the War Resisters Support Campaign to rally for our U.S. military objectors who sought refuge in Canada; to the 2006 campaign to “salute” Lt. Ehren Watada’s refusal to deploy; to the hundreds of Individual Ready Reserve refuseniks we spoke with; to helping build an international network of support for WikiLeaks whistle-blower Chelsea Manning beginning in 2010…. it’s been some ride.

With the reduction in staff expenses, along with the closing of our Oakland, California office space, we expect Courage to Resist will be able to continue serving U.S. military war objectors, including the Chelsea Manning Support Network and its Chelsea Manning Defense Fund, through 2016 and beyond.

Before the orchestra plays me off the stage, I want to thank the following Courage to Resist members whom I had the honor of collaborating with: David Solnit for ushering the project into existence, former co-director Lori Hurlebaus, our About Face: Military Resisters Turn Against War (PM Press) authors Sarah Lazare, Cindy Whitman-Bradley, and Buff Whitman-Bradley, former collective members Max Diorio, Margaret Howe, Michael Thurman, and current collective cornerstone Bob Meola, and, of course, our Chelsea Manning campaign leaders Emma Cape, Mike McKee, Nathan Fuller, Owen Wiltshire, and Farah Mushin.

Finally, I need to give a shout out to my fellow Chelsea Manning Support Network Steering Committee members Rainey Reitman, Kevin Zeese, Gerry Condon, and Bob Meola. And I also can’t overlook attorney James Branum’s tireless efforts in support of many of Courage to Resist’s adopted legal cases.

It’s time for me to take on new life adventures. However, I hope that you’ll join me in continuing to support the important, and ongoing, efforts of the Courage to Resist Organizing Collective.

Support the troops who refuse to fight!