With your help, we have mailed over 15,000 letters so far to Canadian officials in support of a political resolution that would allow U.S. war resisters to stay in Canada.

In June 2008, our efforts were rewarded when the Canadian Parliament passed an historic motion to officially welcome war resisters. This motion was reaffirmed in February 2009.

The Conservative government is making it clear that they will disregard the democratic decision of the House of Commons, the demonstrated opinion of the Canadian citizenry, the view of the United Nations, and millions of Americans.

Please sign this new letter to “Please act immediately to cancel the deportation of Rodney Watson… [and] allow U.S. war resisters to stay in Canada.” (complete letter below)

Courage to Resist volunteers will send this letter on your behalf to Prime Minister Stephen Harper and Minister of Citizenship and Immigration Jason Kenney via International First Class Mail.

Complete text of letter that will be sent on your behalf 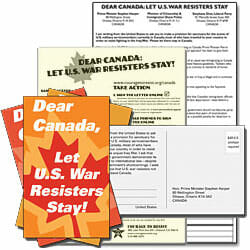 A first class one-once letter from the U.S. to Canada currently costs $0.75