In August, we launched a campaign to “Free Army conscientious objector Dustin Stevens and the end illegal pre-trial punishment of the Fort Bragg 50!” With your help, we did just that! Dustin is certain that he would still be facing over a year in the stockade if it were not for your support. It is not everyday that we win an outright victory for GI resisters.

In May 2002, after five months in the Army, then 19-year-old Spc. Dustin Stevens refused to graduate with his 82nd Airborne Division training unit. “I knew in my heart and in my mind, I couldn’t kill anybody and couldn’t be a part of an organization that did so,” he explains. Instead of discharging Dustin as a conscientious objector, his command simply ordered him to go home and await discharge papers. In January 2009, during a routine traffic stop, Dustin was shocked to learn that there was a warrant for his arrest. He was immediately arrested, turned over to military police, and was held on restriction at Fort Bragg, NC. 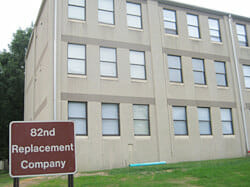 Dustin Stevens was one of about 50 soldiers held at the 82nd Holdover Unit awaiting likely AWOL and desertion charges. They lived in a legal limbo of poor living conditions, verbal abuse, and arbitrary punishments while waiting for up to a year to be actually charged and court martialed. These soldiers were subjected to many months of unjust and illegal punishment prior to their day in court.

Hundreds of supporters wrote military authorities, “We respectfully request that the Army improve living conditions, reassign sadistic supervisors, end all informal punishments, and expedite resolution for these soldiers so that they can return home to begin rebuilding their lives as soon as possible.”

Shortly after Dustin first contacted us, staff organizer Sarah Lazare travelled across the country and not only met with Dustin and other members of his unit, she also recorded an interview with their commanding officer! After her first article was published, living conditions improved. After her second article, co-authored with Dahr Jamail, “Echo Platoon” was disbanded. And after we mailed hundreds of petitions to military authorities on behalf of supporters like yourself, Dustin’s court martial for desertion was canceled. He was discharged last week.

I summing up what’s next for him, Dustin offers:

I am happy that I have been set free, but the fight is far from over. I apologize for not having the awesome response that some may have hoped for. I have been trying to find the words to show how unbelievably excited I am that I can now pursue my life. But something else keeps me from speaking. How do I start over at 26? It has taken me that long to get where I wanted to be.

I am one of the lucky ones from Echo Platoon that got an OTH (other than honorable discharge). A few of my friends received Bad Conduct or Dishonorable discharges on top of jail time. Some of them are still there today. I was let out because I have a big mouth and a lot of people backing me up. The guys and girls that stay quiet are still getting screwed. How do we fix this, how do we help these people? Fort Bragg is just one problem, there are many more.

I am eternally grateful for the help that I received from Courage to Resist and others like them. But I am far from finished. My fight is for every single person that has the right to choose. The men and women that share a cell because of their refusal to fight. I will fight for the soldiers with a conscience. I will not stop my fight, ever.