“My experience of physical threats, religious persecution, and general abuse seems to speak of a system that appears to be broken…. It appears that I have no other recourse but to now refuse all duties that prepare myself for war or aid in any way shape or form to other soldiers in conditioning them to go to war.” – Army SPC Kyle Wesolowski

Several months after returning from a combat tour in Iraq, Fort Hood, Texas soldier SPC Kyle Wesolowski submitted an application for a conscientious objector discharge based on his Buddhist faith. Since that time, SPC Wesolowski has completed a rigorous examination of his beliefs by military authorities, including required interviews by a psychiatrist, a chaplain and an independent investigating officer. All of these officials have recommended that SPC Wesolowski be discharged based on the sincerity of his beliefs.

Despite these positive recommendations and the clear dictates of the regulations governing conscientious objection in the Army, SPC Wesolowsi has been subjected to a deliberate campaign of harassment, threats of violence and religious discrimination. In response to these developments, SPC Wesolowski has issued the following statement today about his case:

My unit Delta Company 1-12 Cav, Fort Hood, TX (Cpt. Lockhart, commander) with full knowledge that I am sincere CO applicant, has stopped at nothing to do whatever they can to sabotage my process. This includes harassment, threats of physical abuse and religious discrimination. These actions forced me to submit an appeal for redress (a precursor to a formal Article 138 complaint) to ask that the command follow the law and cease from harassing me based on my status as a CO applicant. This did little to stop them and the harassment continued, so I was forced to place an IG complaint against my 1st Sgt Gonzalez.

The continuation of harassment is evidence that the system the Army has in place to protect it’s soldiers is a facade used to project an illusion of a safe work environment.

Unfortunately, my experience of physical threats, religious persecution, and general abuse seems to speak of a system that appears to be broken. This is evidenced by my exhaustion of all of the Army avenues as stated above to resolve my issues: (1) speaking to my chain of command on several occasions, (2) the article 138 process, and (3) an IG complaint. Having taken these measures with no avail (and given my unit’s decision to send me out on field exercises) it appears that I have no other recourse but to now refuse all duties that prepare myself for war or aid in any way shape or form to other soldiers in conditioning them to go to war. 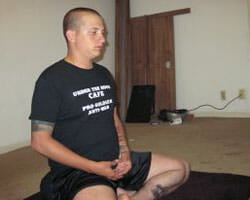 Therefore, in compliance with Army regulations, I refuse to take part in any field exercises that go against my core values as a Buddhist such as but not limited to: handling of ammunition and weapons under any circumstances, maintenance of any army vehicles, taking part in any classes in army job education as these activities prepare either myself or others for war. Participation in such activities is perpetuation of war which is an objection of my conscience.

Disclaimer: This statement does not reflect the views of the US Army or the DOD.

A campaign has been launched to support SPC Wesolowski. More information on the campaign can be found at: freekylewesolowski.wordpress.com.