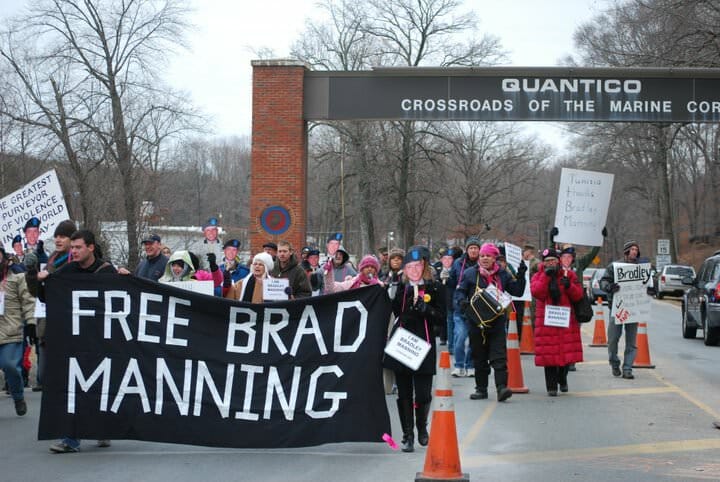 30k petitions protesting inhumane conditions to be delivered this weekend

By Courage to Resist. Select images above for larger versions of Bill Perry’s photos.

Quantico, Virginia (January 17, 2011) – Over 150 concerned citizens risked arrest today at the gates to the Marine Corps base at Quantico in order to protest the inhumane conditions that accused WikiLeaks whistle-blower Army Pfc. Bradley Manning has been held in for seven months and counting. Supporters marched towards the base front gate chanting “Free Bradley Manning!,” approximately a mile from the brig where Bradley has been held in solitary confinement for the last five months, before being stopped by Marine MP’s. CodePink activists had collected a care package for Bradley that included a blanket, a Snuggie, cookies, books and music. Unfortunately and unsurprisingly, it was rejected by the Marines. Earlier in the day, many of these activists rallied outside FBI Headquarters in Washington DC to protest the September raids on anti-war organizers in Chicago and Minneapolis.

Also, photos of recent rallies in support for Bradley Manning in Santa Cruz, and San Francisco.

Meanwhile, the website Firedoglake.com will be delivering over 30,000 petition signatures this weekend to Quantico urging that Bradley Manning be treated humanely. There is still time to add your name today here.