In the Washington Post this week (May 3, 2017 edition), journalist Dan Lamothe exposes the horrifying hazing of young recruits. Most Marines are unlikely to experience torture of the magnitude detailed in the article, yet it is a glimpse into the dehumanizing indoctrination of boot camp.

A Marine Corps recruit who was hazed by his drill instructor suffered second- and third-degree chemical burns on his buttocks so severe that he needed skin grafts, according to documents newly released by the service.

The recruit’s skin was “liquefied” at the service’s storied boot camp at Parris Island, S.C., the documents said. The injuries occurred after he was ordered to perform unauthorized exercises under an upside-down laundry bin on a floor covered in bleach and required to stay in his wet pants for hours. The recruit reluctantly told another drill instructor about his burns that night, but stayed in training for a few more days. His condition deteriorated after he was told that he would not be able to graduate with his peers if he sought medical attention.

‘They put us through hell’: A Marine abused at boot camp explains why he spoke out

The case was detailed among thousands of pages of documents released to The Washington Post through the Freedom of Information Act by the Marine Corps and the Naval Criminal Investigative Service (NCIS). Combined, they show that a hazing scandal that erupted last year at Parris Island following the death of a recruit, Pvt. Raheel Siddiqui (photo right), is part of a history that includes dozens of cases of hazing and abuse against recruits in the past five years….

Siddiqui, 20, died at Parris Island on March 18, 2016. He fell 40 feet over a railing after facing physical abuse from his drill instructor, Gunnery Sgt. Joseph Felix, according to military documents. Separately, Felix also is accused of putting another Muslim recruit in an industrial-sized clothes dryer and turning it on repeatedly in July 2015. He and another former drill instructor, Sgt. Michael K. Eldridge, face charges that include cruelty and maltreatment, being drunk and disorderly, failing to obey a lawful order and making false official statements in that case. 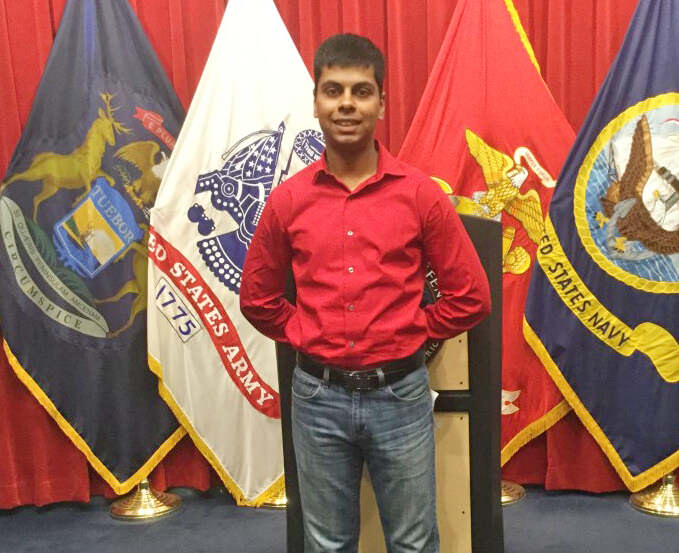 The article notes that, “At least 20 other hazing investigations involving drill instructors have been detailed by the Marine Corps and released through the Freedom of Information Act in the last few weeks in a rolling fashion.”

Young women and men who are considering the military as a viable alternative should be are of these facts. The friendly military recruiters who are inviting them to after-school BBQs–complete with free hotdogs and soda–are unlikely to bring these stories up. Inconvenient fact about the military: You may be tortured by fellow soldiers, who are in charge of your “well-being”, in order to “tearing you down” and “build you back up”, so that you can effectively fight endless wars abroad.