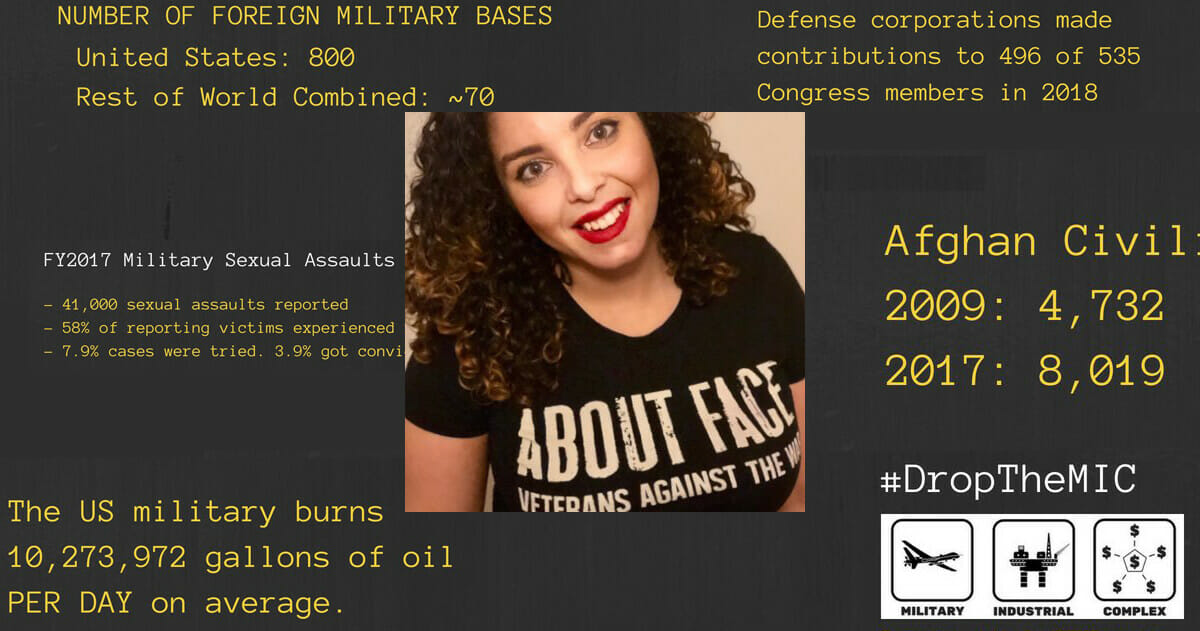 US Army Capt. Brittany DeBarros has taken to social media to share some basic facts about our country’s endless wars, and the impact those are having both abroad and at home. The July 20th edition of the Army Times declared, “An Army Reserve psychological operations officer is on day seven of 14-orders, according to her Twitter account, and she’s taking the opportunity to let the internet know she does not approve of the Defense Department.” Brittany hasn’t stopped speaking out since, despite pressure from the Pentagon.

Brittany started posting a series of simple graphic messages on July 14. The first one read, “I’m on Army Orders for the next 14 Days and there’s not much I can do about that. WHAT I CAN DO is schedule daily posts in my absence with facts about the horror being carried out by our war machine for profit.” It was accompanied by a graphic with the text “At the current rate, the US drops a bomb every 12 minutes.”

A couple of days later, she declared, “For years the executive branch has run wild warmongering while congress stands by. Greed fueled violence. Racist, Islamophobic fueled SILENCE. It’s on us to dismantle and our own liberation depends on it.”

After the Army announced that they were investigating her, she shared, “In case anyone is confused, these are my personal views and I don’t speak in an official capacity for the DOD.”

Brittany addressed her motivations on social media, explaining, “Two headlines within the last week: ‘White House: U.S. Can’t Afford Veterans’ Health Care Without Cuts.’ and ‘House Passes $717 Billion Defense Bill.’ So tell me again how it’s against the Army Values for me to point out this charade? And how I’m hurting my soldiers by refusing to be quiet about the fact that we have endless dollars to send them to war but suddenly are broke when they need care? I call b.s.”

This is the second time that she has caught the Pentagon’s attention. Brittany was also threatened with reprisal after giving a speech at the Poor People’s Campaign rally in Washington DC in June. At that time, she responded:

In the Army, we are taught that our core values must be Loyalty. Duty. Respect. Selfless service. Honor. Integrity. Personal courage.

Am I LOYAL if I say nothing while a wealthy few pay our politicians to disregard the Constitution I swore to protect so they can make a killing off of killing?

Am I a DUTIFUL leader if I stand by while the young soldiers for whose lives I’m responsible are sent to kill and die in illegal wars based on lies?

Am I RESPECTFUL of this uniform we wear if I am silent about the atrocities it’s being used to carry out?

Am I SELFLESS in my SERVICE if I fall in line and stay quiet simply to avoid risk to myself and my career?

Am I living with INTEGRITY if I say ‘I’ll do the right thing later when it won’t cost me so much’?

And where is my PERSONAL COURAGE if, in the face of repression and threats, I cower and back down, especially when so many before me have sacrificed so much for the very freedom I am exercising?

So if what I’ve been saying is somehow doing wrong by the military, the mistake they made was commissioning a leader that takes these values seriously. Leaders of conscience have a moral obligation to speak up #GIResistance #CourageToResist

About Face: Veterans Against the War (formerly IVAW) is hosting a gofundme drive to cover Brittany’s legal representation costs. Please help us and About Face reach our $3,000 goal to support Brittany by contributing at: