“No regrets” for resister who dumped human dung on draft files 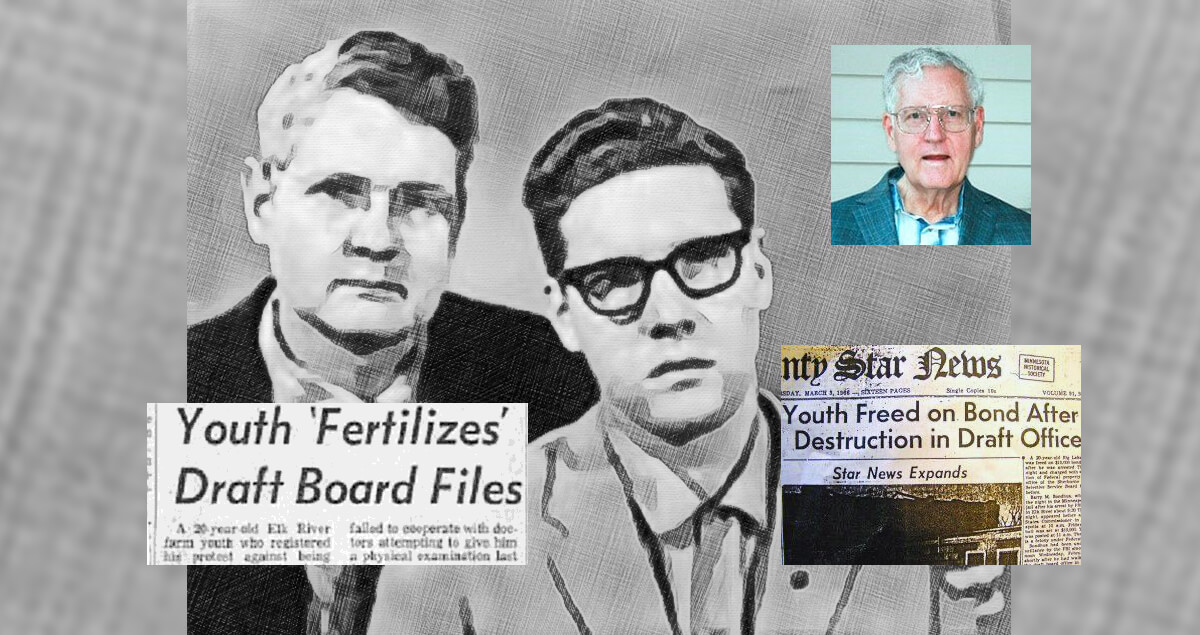 “In September 1965, Barry Bondhus … received his draft notice. Dutifully, he traveled to Minneapolis for the military physical and psychological tests. But that’s where his cooperation would end,” wrote Britt Aamodt for the Elk River Star News back in 2014.

“My opinion is that since our constitution guarantees: Life, Liberty, and The Pursuit of Happiness; and because the army denies all three; the draft is not lawful.” Barry, sometimes referred to as “the Big Lake One,” who listed his race as “human” on the draft forms,” noted PeaceButtons.info.

At his draft board, the member of the board asked where Barry’s other ten brothers were. At that, Barry’s dad got angry and walked out of the hearing. When Barry and his parents got home they thought about what had happened.

“Oh, you mean rest, as in residue? Like what’s left behind in a bathroom stall? OK, well, the family could certainly oblige, they decided. The brothers set a pail in the bathroom. For the next few days, they collected their business in the pail.”

On February 24, 1966, Barry took two buckets of his, and his brothers, manure to the Elk River, Minnesota, draft board. He set the first one on the secretary’s desk.

“I said, ‘Here’s the rest of my brothers. What do you want me to do with them?’ She kept saying, ‘I don’t know what you’re talking about,’” Barry recalled to the Elk River Star News. “He hadn’t thought beyond delivering the buckets. But now inspiration struck. He spotted the file cabinets containing the county’s draft records. “I said, ‘If you don’t know what I’m talking about, then I’ll just put them over here.”

Barry opened the top drawer of the first cabinet and poured the bucket onto the county’s draft files. He took the other bucket and kept pouring. He was eventually sentenced to 14 months in federal prison for destruction of government property and interference with Selective Service.

“Today, Bondhus’ resistance seems like just another protest in a decade overrun by anti-war protests, draft card burnings and flights to Canada. But his act came at the very beginning of the movement,” noted the Elk River Star News.

““I found out later that no one had ever attacked a draft office before,” he said. “I was the first.” Newspaper editors had a field day with the story. Draft records destroyed by human excrement? This young man knew a good metaphor when he saw one. “I later talked to protestors who read about it and said they got inspiration from my story,” said Bondhus, who to this day carries a felony on his record. Does he have regrets? “No,” he said. “I’m proud of what I did,” noted Barry.

“Barry Bondhus passed away peacefully on Wednesday, December 12, 2018 at his home in Maple Lake surrounded by his family. He is survived by his wife of 50 years, Linda, 12 children, 42 grandchildren, 4 great-grandchildren, 10 brothers, 1 sister and many nieces and nephews,” reported the Minnesota Star Tribune.