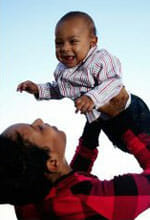 By Friends and Family of Alexis and Kamani Hutchinson. Updated January 15, 2010

Despite assurances by military public affairs officers that the Army would work with Spc Hutchinson and her attorneys to resolve the matter administratively, rather than through the criminal process, charges of missing movement, AWOL, dereliction of duty, and insubordinate conduct were filed today. Spc Hutchinson is a 21-year-old native of Oakland, CA, now facing over three years in prison, a dishonorable discharge, and the loss of custody of her infant. She has been assigned to Hunter Army Airfield near Savannah, GA, since February 2008.

“I am disappointed in Major Daniel Gallagher’s decision to go ahead with filing charges, which shows a lack of compassion for this young mother and her infant son, and a lack of discretion to deal with the situation fairly. The situation tends to show that the Army is not able to effectively and humanely counsel Army families in this situation,” states Spc Hutchinson’s civilian attorney Rai Sue Sussman of San Francisco, CA. “An infant and his mother were forcibly separated, when other options were available to the commander.”

“We hoped that the public outcry over this injustice would have moved the Army to find a fair and compassionate resolution to a difficult situation,” notes Jeff Paterson, Project Director of Courage to Resist. “Instead, supporters of Alexis and Kamani nationwide will now lobby members of the Congressional Government Oversight and Reform Committee to investigate. What is happening here should not be allowed to happen to any single parent.”

So far, 77 individuals have generously contributed a total of $3,000 towards Spc Hutchinson’s legal defense. 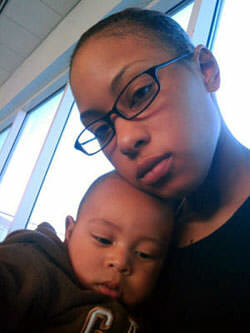 On November 6, 2009, Army Specialist Alexis Hutchinson was arrested and confined when she missed her plane to Afghanistan because she was taking care of her infant son. When she reported the following day, the Army removed her son from her and arrested her. She was granted leave to go home for the holidays in December, and returned to Georgia with baby Kamani last week.

In anticipation of going overseas, in early October 2009 Spc Hutchinson flew to California and left her son with her mother Angelique Hughes of Oakland, CA, as per her Army family care plan. However, after a week of caring for 11-month-old Kamani, Ms. Hughes realized that she was unable to take care for the infant in addition to her other duties to a special-needs daughter, an ailing mother, and an ailing sister. Ms. Hughes immediately contacted her daughter and the military chain of command that she was not able to care for Kamani as planned.

The Army initially gave Spc Hutchinson an extension of time to find someone else to care for her son, and in the meantime her mother brought Kamani back to Georgia. A few days before Spc Hutchinson was scheduled to deploy, however, the extension was revoked. She was told that she would immediately deploy, and Kamani would be placed in the local county foster care system. Any option to put her child Kamani in government custody carries the risk of Spc Hutchinson permanently giving up parental rights. Faced with that choice, Spc Hutchinson did not show up for her plane.

The military had Spc Hutchinson arrested the following day and put her infant in the county foster care system. The baby’s grandmother retrieved him and cared for him temporarily until his mother returned for the holidays. Both Spc Hutchinson and her son are currently back at Hunter Army Airfield, GA.

“They told me because I missed movement I’m going to jail… I started crying a lot and I tried to explain that I just want an extension, I just need time, that I need someone to take care of my child. They said that they didn’t care… That was the worst thing I have ever gone through, to have my child taken from me,” explained Spc Hutchinson in a November 2009 interview with KALW public radio.